Ballador the Bright was a paladin stationed at Andorhal. He protected the Urn of King Terenas alongside Sage Truthbearer and Uther Lightbringer, but he was defeated by Arthas.[1] 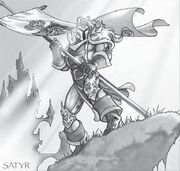 Ballador was small for a human, but bulky and well-muscled. Though a quiet man, he nevertheless still commanded attention from others. His brown hair was kept in a long ponytail, and his brown eyes were kind. However, when he spoke, the rich baritone could undoubtedly either entrance women or command men.

Ballador was a quiet man when he was away from the battlefield, but was confident and commanding when fighting. He cut his teeth in the Second War and fought Arthas in the Third. Though he survived his encounter with Arthas in Andorhal, he failed to save Uther Lightbringer from Arthas’ blade, and this knowledge haunts him. This drives him in battle, as he commands the troops and puts himself in the middle of melee in each battle, regardless of whether he needs to or not. He searches out the commander of the enemy and attempts to take him/her/it down immediately.[2]