Balnazzar, under the guise of Saidan Dathrohan, Grand Crusader of the Scarlet Crusade, is the final boss in the Scarlet Bastion of Stratholme. 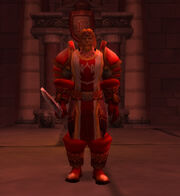 Before you start the fight, shield your tank and engage Grand Crusader Dathrohan. Wait for a few seconds for the tank to build up aggro before the rest of your party attacks. Dathrohan attacks aren't terribly damaging at this point, but don't let him engage your softer party members. Pull him to face the back wall, facing away from the rest of the party. Keep your party's ranged damage about 10-15 yards away to avoid his stun.

At 40% health, Grand Crusader Dathrohan transforms into Balnazzar. When he changes into Balnazzar, he will have full health and mana, but he still retains all aggro. Do not change your tactics, keep him away from your casters and wear him down. Most of his skills are Magic and can be removed by a priest or paladin.

When he dies, undead mobs spawn outside of the room, which is the reason for fighting at the back of the room.

Aggro
Grand Crusader Dathrohan yells: Today you have unmade what took me years to create! For this you shall all die by my hand!

Transform
Balnazzar yells: You fools think you can defeat me so easily? Face the true might of the Nathrezim!

Death
Balnazzar says: Damn you mortals! All my plans of revenge, all my hate... all burned to ash...