For the character, see Ban-Lu. 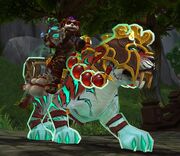 The Ban-Lu, Grandmaster's Companion is the Monk class hall mount.

Sometime during the Legionfall invasion a monk named Yiska informs the Grand Master, that Master Bu has returned from a spirit journey and wishes to speak with him.

The Grand Master goes to meat with Bu at the inn in Morning Breeze Village. He tells the Grand Master to take some time to listen to his story. He tells of a great Ban-Lu, son of Xuen. For a long time, Ban-Lu had been the companion of all the great Grand Masters. However, when the Legion attacked the Peak of Serenity, Ban-Lu had gone missing.

Along with the Grand Master, Bu traveled back to the Peak of Serenity to find answers. They find a trail of paw prints, which led them to Smelly Mountaintop. Smelly tells the Grand Master that hozen had stolen his Luckydo and everything had been going downhill without it. While Master Bu rested, the Grand Master went high in the mountain and found his Luckydo. However, smelly decides to make his burning backpack his new Luckydo as nothing bad happens when he had been carrying it. He gives his former Luckydo to the Grand Master.

Smelly informs the Grand Master that he had seen the tiger head towards the monastery. With Bu recovered, they travel to the monastery where they meet Commander Shen-Li. He had seen the tiger and makes a deal with the two if they clear out the remaining sha at the Grove of Falling Blossoms. With the deed done, Commander Shen-Li thanks the Grand Master and tells him that the tiger had gone south.

With no more close, Bu gives the advice to go speak with the jinyu for they can find out where Ban-Lu is by speaking with the water. They meet with Waterspeaker Ryuli at Inkgill Mere. Ryuli gratefully accepts to help and tells the Grand Master to bring him Moon Lilies. After receiving the flowers, Ryuli sends them out in the water and finds where Ban-Lu is. He tells the Grand Master that he can be found at Lake Kittitata.

After taking enough hits, Ban-Lu stops and accepts the Grand Master as his new companion.

This mount is a reward from

The child of Xuen, Ban-Lu has served each Grandmaster faithfully for many years.