Baron Ashbury was an eastern nobleman from Gilneas. 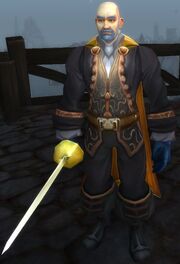 He and Genn grew up together, and he was once one of the king's most trusted friends. He was present in the Capital City to create the Alliance of Lordaeron and agreed with Lord Godfrey, to sent only a token army. He participated in the hunts with Genn, Lord Marley and Godfrey in the Blackwald.[1]

One day before the attack on Gilneas City, he quarreled with Lord Walden because of the bad situation in Gilneas especially the shortage of livestock.[2]

He joined with Lord Vincent Godfrey to turn Genn Greymane over to the Forsaken in exchange for an end to hostilities. Along with his ally, Lord Walden, Ashbury was slain by Gilnean worgen who fought to save their King. Godfrey, Ashbury and Walden were all raised in undeath by the Forsaken and served them for a time. After Godfrey betrayed the Forsaken by slaying Sylvanas Windrunner, Ashbury fled with his master into nearby Shadowfang Keep.

Oddly, as a Forsaken Ashbury has hair, but at the time of his death he was bald.