Not to be confused with Silverlaine Thorne.
For the Classic version, see Baron Silverlaine (Classic). 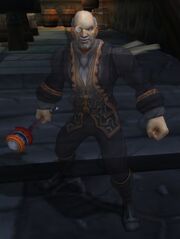 Baron Silverlaine is a human ghost and the second boss in Shadowfang Keep. He is located in the Dining Hall, or Great Hall via teleport.

Baron Silveraline and his family were killed by the worgen, summoned by Archmage Arugal from the Emerald Dream to aid Gilneans against the Scourge, after they turned on the Gilneans. After the Fourth War, Mathias Shaw reported a common belief that the ghost of Baron Silverlaine still haunts the keep.[1]

Baron Silverlaine was master of the keep before it fell to Arugal's worgen. Now his cursed spirit calls upon the very wolf-beasts that slaughtered him to punish further trespassers into his home.

Soul Drain — Rethilgore channels on a random enemy target, immobilizing and draining 25 health every 1 seconds for 4 sec. Rethilgore heals for twice the amount of health drained.

Silverlaine will periodically cast Cursed Veil; the magic effect should be dispelled if the affected targets are going to be healed in the next 8 seconds.

At each 25% health, Silverlaine will summon a random worgen spirit; those adds should be tanked and killed before resuming DPS on Silverlaine.

Aggro
Leave this accursed place at once!

Death
This death is only a temporary respite from my curse.

Brann mentions that unlike Pyrewood's good folk, Shadowfang's lords were bastards to begin with and that they revel in the worgen curse.[2] It is not sure wether he included Silverlaine in those lords.