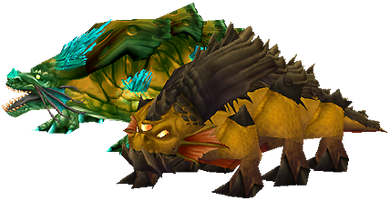 There are a few types of creatures known as basilisks in the Warcraft universe. Basilisks are classified as beasts and as of Mists of Pandaria can be tamed by hunters.

There are basilisks on the worlds of Azeroth, Outland, Mardum and Argus.

Basilisks are heavily-armored, six-legged lizards which are related to the crocolisk.[citation needed]  Basilisk stomachs are capable of dissolving nearly anything. Because of this, basilisks have a fondness for eating crystals and rocks from the area they inhabit. The basilisks of Azeroth long had a fondness for the legendary "singing crystals" that grow in Stranglethorn Vale. As a side effect of eating the crystals, the Basilisk have mutated: the mystical crystals now grow from their scaly hides, giving them even greater power against their enemies.[1] This not only makes their hides extremely hard, but gives them a unique power. They're best known for their ability to petrify a person with their stare. Due to this, basilisk parts are often sought by mages and alchemists for study. These powerful, enchanted creatures are something of an anomaly throughout the land of Azeroth.[1] They are also found on the alternate Draenor and likewise can turn their enemies into stone.[2] Basilisks are rock-eaters, and are fed a diet of flowers and stones at the Suramar Menagerie.[3][4]

Another type of creature native to Outland is also known as a basilisk. Unlike a normal basilisk, their skin comes in smooth bright colors, and they have three glowing eyes. These basilisks are commonly found in various zones throughout Outland, often inhabiting the cracked edges of the world. Their notable drops include

[Dampscale Basilisk Eye]. While they appear reptilian like their Azerothian counterparts, they do in fact suckle their young, as evidenced by the Canyon Icemother.

A basilisk's meat, brain and milk are suitable for consuming.[5][6] Their meat is even considered a delicacy among the centaur of Desolace.[7]

Their blood can be used in blood magic rituals,[8] and even in a potion to help cure blindness.[9] Their eyes, along with the ability to turn victims to stone, luckily lose their properties once slain. They can still be used, however, to help focus and concentrate magics,[10] and in potions to induce prophetic visions.[11] Their heart, while made of complete stone, can be used in certain shaman rituals,[12] their spine can be harvested and used in powerful enchanting,[13] and their tail and hide can both be used to fashion armor.[14][15]

Basilisks are large-thick bodied reptiles with six stumpy legs and a scaly hide studded with shimmering crystals. Their eyes shine with a pale, eerie glow.[16] The creatures built their nests near the crystal beds and even rubbed against them. In time, basilisks were born with chunks of crystal growing from their hides. The crystals' mystical nature gives basilisks great power against any would invade their lairs. While gentle enough when left alone, basilisks will defend their nests with great ferocity. In addition to biting and clawing, basilisks will focus the power of the crystals in their hide to plunge intruders into slumber, lull their prey to sleep or even turn them to stone. If that attack should fail, basilisks unleash their petrifying gaze upon their foes.[16]

Basilisks are possessed of barely more than animal intelligence but can put prey to sleep or even turn enemies to stone (if they aren't hungry). While fierce fighters, basilisks do not exhibit cruel or violent tendencies. They defend their territories and hunt other creatures, even sapient ones, for food. Basilisks' hides range from dark chestnut shades of brown to mossy green and ocean blue. Males tend to be larger and brighter than females. Immature basilisks usually stand as tall and wide as an adult boar. Full-grown basilisks grow to 10 feet in length and weigh up to 2,500 pounds. After mating, a basilisk pair remains together for several months. The female buries her eggs in warm earth and rotting plant matter; she guards the eggs while her mate hunts and brings her food. After the young hatch, the male departs. A basilisk stays at range and targets its enemies with sleep. Once its prey enters range, the basilisk switches to its petrifying gaze attack. When the enemy reaches a distance of 15 or so from the basilisk, the basilisk charges. Basilisks are ferocious fighters but not suicidal; they retreat when the odds turn against them.[17]

In Manual of Monsters Appendix Three another type of basilisk is given, the Ice Basilisk, however, the validity of the source is disputed.

In European bestiaries and legends, a basilisk is a legendary reptile reputed to be king of serpents and said to have the power of causing death by a single glance. The basilisk is popular in some forms of fantasy (a large number of readers will recognize the major antagonist from Harry Potter and the Chamber of Secrets), in some cases as a traditional snake, in others as a sort of lizard. Though it is generally believed that basilisks are capable of reproducing normally, it is possible to create a basilisk through a sort of magical ritual — this species was not thought to breed naturally, the arcane offspring of a chicken and a toad. This parentage created the composite "cockatrice" image of a serpent with certain elements of chicken biology. As a rule of thumb, "basilisk" refers to the creature itself, while "cockatrice" refers to the composite chicken/serpent imagery. The Basilisk's gaze is fatal when met directly, but causes petrification (remaining as still as stone, but still alive) if met indirectly. In a number of modern fantasy, the Basilisk's gaze always turns a being to stone, in the same manner as a Gorgon.