This article is about the bat race in general. For the critter, see bat (critter). For the cat, see Bat (cat). 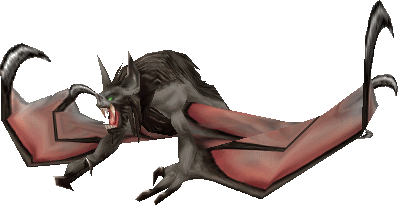 Bats are nocturnal, flying mammals that are found in all regions of Azeroth. These foreboding creatures stalk the night skies of the Eastern Plaguelands, feeding on carrion.[1]

Most bats usually feed on fruit and insects and are no bigger than the average bird. A number of bat species in Azeroth grow to enormous size and pose a threat to adventurers.

Bat riders of the fire obsessed jungle troll's Darkspear tribe are often used as reconnaissance for the Horde since the aftermath of the Third War.

Tirisfal batlings can sense an opponent's heartbeat through echolocation.[2] Vampire bats have been trained as scouts and mounts by the Forsaken of the Undercity and the Amani trolls of Zul'Aman.[3] The Highborne used monstrous, elusive bats known as shadowbats as mounts during the War of the Ancients.[4]

Bats are found in the Tirisfal Glades, Blackrock Depths, Shadowfang Keep, Zul'Gurub, Razorfen Kraul, Eastern Plaguelands, Ghostlands, Karazhan, and Uldaman. The monstrous, flesh-eating bloodwing bat hails from the misty jungle islands of the South Seas, where it is the undisputed ruler of the night sky.[5]

Many bats can also be found in areas around Draenor, such as Frostfire Ridge, Zorammarsh in Tanaan Jungle and the depths of the Shadowmoon Burial Grounds. The vampire bats known as echo hunters, who dwell in the woods of Spires of Arak, don't use their eyes to hunt and can hear travelers approaching from a mile away.[6] The forces of the Shadow Council sometimes use bats as mounts.[7]

A bat's meat and wings are suitable for consumption.[8] They can eat dead insects.[9]

Some bats' eyes are capable of seeing creatures from the Nightmare.[13]

Bats are a family of Cunning pets and are tamable by hunters at level 10. Bats are used for their useful

[Sonic Blast] ability, which stuns a target for 2 secs from up to 20 yards away. This makes them rather strong in PVP, as their stun ability is a spell and it cannot be dodged, blocked or parried.

There are four different skins available for bat pets. Most unique of mention are the rare white bats, which at a low level may prove difficult to tame, as the only bats available with this skin are both rare spawns -

Blind Hunter. Higher level players will have a much easier time, as they can simply head over to Zul'Drak and tame a

Dire bats are enormous bats which look like something out of a nightmare. Their wings are clawed and their fangs are long. A dire bat has a wingspan of 15 feet and weighs about 200 pounds. Dire bats swoop down upon unsuspecting prey from above.[14]