This article is about the Warfront. For the overworld zone, see Darkshore. For the unrelated Cataclysm quest, see

[19] The Battle for Darkshore.

The Battle for Darkshore is the second warfront in Battle for Azeroth where the Forsaken and the night elves struggle for control of a staging area near the former night elven capital region of Teldrassil.[4]

It also came with an updated outdoor Darkshore region. 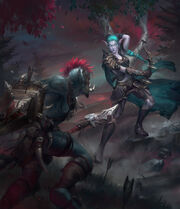 With most of the night elf population seemingly destroyed in the War of the Thorns,[5] Tyrande Whisperwind subsequently asked Anduin Wrynn for Alliance aid in reclaiming Darkshore and the remains of Teldrassil from the Horde, but Anduin was unable to acquiesce, arguing that their resources would be stretched too thin with the Alliance already simultaneously engaging on several battlefronts at Battle for Stromgarde and Zandalar throughout the course of the Fourth War.[6] Maiev Shadowsong, Sira Moonwarden and Shandris Feathermoon also unsuccessfully asked Anduin for assistance shortly afterwards, but were able to secure support from Gilneas and Genn Greymane as well as Alliance adventurers.[7]

Almost immediately after the successful completion of the Night Warrior ritual in Bashal'Aran by High Priestess Tyrande Whisperwind in revenge for the Burning of Teldrassil at the hands of Sylvanas Windrunner, Maiev and Shandris were ordered to prepare the night elves' forces for war against the Horde to reclaim the ancestral lands of Darkshore for the kaldorei. Although Tyrande and Archdruid Malfurion Stormrage were able to temporarily drive away Nathanos Blightcaller and slay Brynja, several night elves, including Delaryn Summermoon and Sira Moonwarden were raised as Forsaken, embittered and disillusioned by Tyrande and Elune's apparent abandonment of them when they needed the most.[8]

With most of Darkshore seemingly controlled by Horde forces, the Alliance forces under Maiev Shadowsong's leadership launched a full-scale coastal attack from The Moonspray, assaulting and capturing the Ruins of Auberdine and killing the death knight Deathguard Captain Vandel, destroying the Forsaken's Blight Throwers in the process. After rescuing several ancients, the Alliance forces, largely consisting of night elves and Gilneans (the latter personally led by Princess Tess Greymane), fought beside Maiev and cleared a path towards Bashal'Aran, where they slew Blightguard Captain Thedric and reclaimed the ancient Highborne settlement for their main base of operations against the Horde. Malfurion rallied the Tree of Life Shadebough and the Ancient of War Gnarlroot to aid their efforts, and Jarod Shadowsong helped recruit additional allies from Bashal'Aran, where most of Maiev's surviving Wardens, including Mirana Starlight, Marin Bladewing, Drelanim Whisperwind, Shalis Darkhunter, and Malace Shade, were also stationed. Shortly afterwards, Lornesta Mine and Cinderfall Grove were also captured, their iron and wood benefiting the Alliance soldiers and reinforcing their buildings respectively.

After successfully constructing an Altar of Elders (enhancing individual player strengths with the aid of Moon Priestess Lasara), the Hunter's Lodge (allowing the upgrade and armor of units by Sentinel Cordressa Briarbow), and the Glaiveworks (from which glaive thrower vehicles were built by Erion Shadewhisper), the Alliance forces were able to capture Forlorn Crossing, Gloomtide Strand, and Ashwood Depot in quick succession, further substantially bolstering their strategic assets and resources; after Ashwood was captured, Mordent Evenshade and Fidelio Featherleaf managed to effectively open a flight path network throughout the region, with the aid of the kaldorei's hippogryph riders. They then routed the remaining Horde forces, including Magmaster Blastcrank and an azerite-fueled shredder, at the ruins of the destroyed and blighted night elf town Lor'danel, reclaiming what remained of the settlement for the kaldorei and securing Lor'danel Landing. For their final assault, the Alliance forces and Maiev herself together attacked The Dredge, an artificial goblin platform in the Veiled Sea, subsequently defeating Sira Moonwarden and temporarily winning the Battle for Darkshore for the Alliance.

The Wardens (Stationed at Bashal'Aran):

Gilneans and other Alliance NPCs:

Introduction to the Darkshore Warfront

Alliance and Horde players will have an introductory scenario, going over the events leading up to the warfront in Darkshore.

The Warfront feature is active for Alliance players immediately and starts the countdown clock for Horde players who wish to access Darkshore. This stage will last for 7 days.

The Horde starts off controlling Darkshore. During this stage, Horde players will be able to teleport to Darkshore, where there will be some things to do:

Neither team is able to access the Warfront feature at this time. This stage will last until the Horde reaches 100% contribution.

Now, The Alliance will be able to teleport to Darkshore at any point as they maintain control. There will be some things to do:

Similar to stage one, Horde players will be able to access Warfronts and the countdown clock for Alliance control of Arathi starts. This phase will also last for 7 days.

The content that Alliance players have will not change. They are still able to teleport to the zone, complete quests and kill the World Boss Ivus the Corrupted for loot.

Just like the second stage, neither team is able to access the Warfront feature at this time. This stage will last until the Alliance reaches 100% contribution.

Now, Horde will once again be able to teleport to Darkshore at any point as they maintain control. There will again be some things to do:

Mariner Farsight  yells: There--in the distance. I can't quite make it out...
Mariner Swiftstar says: What is that?
Captain Taldar Windsinger yells: Bat riders! Take cover!
Maiev Shadowsong yells: Quickly, get to shore!

Victory
Sira Moonwarden yells: You will all face death... in the end.

Avery Nightwing yells: What's that on the horizon? Looks like...
Second Mate Florinius says: What are those?
Dread-Captain Coldfathom yells: Chimaera! Take cover!
Sira Moonwarden yells: Get to shore before we are overrun!

Sira Moonwarden says: We do not fear death! We are its harbingers!

Victory
Maiev Shadowsong yells: I will not be defeated so easily...