For the quest, see

The Battle for Lordaeron[1] (or the Fall of Lordaeron and the Siege of Lordaeron)[2] was fought by the Alliance and Horde for the control of Undercity and the Ruins of Lordaeron. The result of the Burning of Teldrassil,[3] it marks the beginning of Battle for Azeroth, similarly to Legion's Battle for the Broken Shore.

Since the fall of the Burning Legion, tensions kept rising between the Alliance and the Horde. The discovery of Azerite ignited the flames of war, with the Horde taking the opportunity to preemptively strike at the Alliance. After the invasion of Darkshore, the World Tree Teldrassil, home of the night elves, was burned down on Sylvanas Windrunner's orders. The Alliance gathered their forces, aiming to strike back, and marched onwards to Lordaeron Keep.

Before the battle, Undercity's population had already been moved to Orgrimmar through mage portals.

The battle began with the Alliance forces led by Anduin Wrynn and Genn Greymane arriving with the Third Fleet to Tirisfal Glades from the north, and coming all the way to the south to raze Brill. The Horde evacuated the civilians of the Undercity and dealt with the infiltrating SI:7 and Druids of the Claw, although not before Renzik "The Shiv" escaped with the intel he needed. The defense above was led by Varok Saurfang, Baine Bloodhoof, and Lor'themar Theron.

The Alliance forces managed to corner the Horde in Capital City, which they began to besiege. The battle was turning in the Alliance's favor until Warchief Sylvanas launched a devastating counter-attack on an Alliance siege tower, which rallied the Horde in driving back the Alliance. Anduin ordered his forces to push forward and personally killed several Horde warriors until he was knocked down by a blow from Varok Saurfang, whom Genn swatted aside before trying to help Anduin and being incapacitated by a troll shaman. After fending off a troll warrior who tried to attack him while he was down, Anduin looked around himself and saw his army wavering. Dropping his father's sword, King Wrynn then conjured a massive dome of light to heal his forces and to keep the Horde at bay. After the dome ceased, he rallied his reinvigorated forces and told his men to stand united for the Alliance, with both Horde and Alliance forces charging toward each other and resuming the battle.

After the Alliance pushed the Horde back out of the battlefield in front of Lordaeron Keep, Sylvanas called out an Azerite war machine which proceeded to destroy the siege towers. After the war machine was brought down by Alliance forces, Sylvanas reacted by blighting the battlefield, killing both Alliance and Horde soldiers, and then she raised the casualties as undead. Although it managed to break the Alliance ranks, this honorless tactic has distressed Saurfang.

As the Alliance fell back, the battle seemed lost until Jaina Proudmoore arrived on a magical flying Kul Tiran flagship. Jaina neutralized the blight and the undead with her frost magic, then destroyed a section of the Keep's walls with the ship's cannons. The Alliance regrouped inside the city, with Jaina holding back Horde reinforcements with a magical ice barrier and Genn guarding the rear flank. Once in formation, Anduin led the Alliance to fight their way through the Ruins of Lordaeron, killing troll defenders until they faced against Nathanos Blightcaller and Lor'themar Theron, who had the Alliance outnumbered and outmaneuvered with Baine covering them with Forsaken catapults. Alleria Windrunner and Gelbin Mekkatorque, along with void elves and spider tanks, teleported inside Lordaeron just in time to aid Anduin and his forces. The bolstered Alliance turned the tide of battle forcing the Horde to retreat once more using blight to cover them. Anduin ordered Gelbin to take the army back to Brill before Anduin and his squadron proceeded to fly over the blighted landscape using the remaining gnomish flying machines.

Saurfang confronted Sylvanas at the entrance of the Imperial chamber and rebuked her for her honorless tactics. Sylvanas told Saurfang that honor means nothing to a corpse, and she will take whatever pragmatic measures she sees fit to save Horde lives no matter how cruel. Those that disagree with how she has conducted the war does not deserve to stand with the Horde and thus she leaves Saurfang outside the Imperial chamber to die his honorable death; all the while threatening to raise the orc as an undead to serve her when the battle is over. The Alliance then confronted Saurfang at the entrance of the Keep, and upon his defeat he was taken prisoner. Baine Bloodhoof accused Sylvanas of leaving Saurfang to die, but Sylvanas retorts that it was the death he wanted and that Baine is free to join him. Sylvanas then gives her bow to her champion Nathanos and tells him to prepare the final phase of their plan.

After the Battle for Lordaeron, both Capital City and Brill laid in ruins, and mindless undead roamed the region. With Lordaeron Keep blighted, it was seemingly impossible to claim the city and some of the surrounding lands. However, according to Captain Roderick Brewston in Stromgarde Keep, the Alliance continues to occupy most of Lordaeron, and their fighting to reclaim Arathi is largely to ensure that they are able to continue to hold Lordaeron.[4]

Experience the struggle for control as the Alliance storm the shores of Lordaeron Keep! For victory, for glory -- for Lordaeron!

In-game, the Battle is depicted during the quest and scenario

[10-50] The Battle for Lordaeron, an up-to-20-player faction-specific scenario. See the quest article for more information and a walkthrough.

After the Battle for Lordaeron, the map of Tirisfal Glades is updated. Undercity and Brill are no longer accessible, and the same scorched area as in the Battle for Lordaeron scenario map will stretch from the Ruins of Lordaeron to the North Coast. Zidormi will appear on the eastern edge of the scorched area (to the west of Balnir Farmstead), and will offer to take the player characters back to the time before the battle, the same way as in Theramore, Blasted Lands, and Silithus. If Horde mages attempt to

[Teleport] or create a portal to Undercity, they will be taken to Zidormi's location instead. If a player attempts to enter the Ruins of Lordaeron or the Undercity, they will start taking massive damage from the blight, even if they are flying above the ruins. If they somehow make it to the elevators, the lower ground in front of them is safe from the blight but there is an invisible wall preventing access to the elevator, which is still operational. If players manage to get inside they will be automatically teleported back to Zidormi upon entering the central chamber. 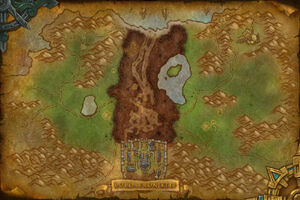 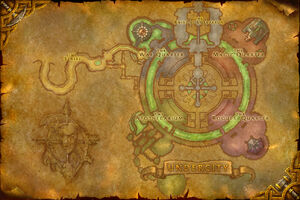