For the Warcraft II: Tides of Darkness version of this battle, see Assault on Hillsbrad (WC2 Orc).

The Battle of Hillsbrad Foothills[3] or the Assault on Hillsbrad was one of the earliest battles of the Second War and was the first major battle between the Orcish Horde and the Alliance of Lordaeron. The fighting lasted for hours and took place in the Hillsbrad Foothills near Lordaeron's southern coast, halfway between Southshore and Gilneas, nine days after the formation of the Alliance. The town of Hillsbrad had not yet been founded.[citation needed]

Alliance Supreme Commander Anduin Lothar had stationed his army in the Hillsbrad Foothills near Southshore, believing this location was centralized enough for his forces to quickly deploy anywhere in continental Lordaeron. This was vital because Lothar and the Alliance leadership did not know where the Horde would invade, or even whether they would invade by land or by sea. While waiting among the foothills, Lothar planned strategies with the Alliance kings and his four chosen lieutenants: his second-in-command Turalyon, Uther, Khadgar, and Grand Admiral Daelin Proudmoore.

Two days prior to the battle, the armies of the human kingdoms were joined by an elven battle group led by Alleria Windrunner. The Kingdom of Quel'Thalas had sent this expedition to honor the debt that Silvermoon had to Lothar, last of the Arathi bloodline.

Orgrim Doomhammer, warchief of the orcish Horde, had recently led his forces in a lightning-fast invasion of Khaz Modan. Using iron and wood resources taken from the dwarves' territory, he ordered the construction of a transport fleet. These large rowing ships carried thousands of orcs across the Great Sea to land in southern Lordaeron, where Doomhammer did not believe the humans would expect an attack. It is not clear which Horde clans or leaders participated in the Assault on Hillsbrad, but it is known that Kilrogg Deadeye (of the Bleeding Hollow) and Zuluhed (of the Dragonmaw) were in different parts of Khaz Modan at the time, and Zul'jin's Forest Trolls had not yet linked with the Horde.

Alleria's rangers and Proudmoore's scout ships each reported these movements, and Lothar rushed his army west to meet the Horde as they landed.

Before the Horde fleet made landfall, it was intercepted by Alliance warships. Proudmoore's navy sank several of the orc transports, killing thousands of orcs that were onboard[2]—decimating the Horde's initial fighting force (tens of thousands[4]) before the main battle began.

Despite these losses, the Horde's large number of transports allowed them to reach Lordaeron's coast with warriors that still outnumbered those of the Alliance.[5], and orcs continued to land throughout most of the battle. To meet them, Lothar had spread the Alliance army across the last line of Hillsbrad's rolling foothills, facing toward Southshore and the Great Sea. The Alliance defenders advanced toward the shoreline as the Horde landed, hoping to attack the orcs as they disembarked. 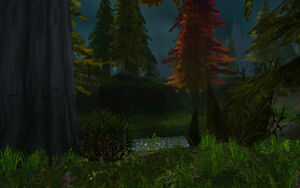 Lothar charged from his line and attacked the orcs himself, soon followed by Turalyon and Uther. Alliance forces cheered as the three leaders struck down several orcs, crushing them left and right. As thousands more of the Horde landed, however, the three fell back to the Alliance front line to avoid being overwhelmed—and at least one arrow from Alleria saved Turalyon from this fate.[6]

Returning to the line safely, Lothar ordered his soldiers to raise spears and link shields to repel the oncoming orcs. The Horde crashed into this shield wall three times, taking heavy casualties with each assault. The human defenders likewise fell in several places, but Alliance leaders formed them into new lines behind the existing line of troops.

The orcs held back after the third failed assault, allowing a handful of death knights to take the field. The death knights proceeded to point their truncheons forward, killing the defenders directly in front of them as blood poured from the humans' mouths, noses, and ears. Shocked at this dark magic, Uther bathed the remaining Alliance soldiers in Holy Light to protect them, and then he led his three paladins (Saidan Dathrohan, Tirion Fordring, and Gavinrad) out of the Alliance line to attack the death knights directly. The death knights and paladins were evenly matched, neither able to gain advantage over the other, and they continued to occupy each other for the duration of the battle.

After one more orcish assault failed to break the Alliance line, the Horde brought several giant ogres forward. The ogres, armed with uprooted trees as clubs, crushed entire sections of the Alliance's wall of soldiers. As the Horde poured through these gaps, Turalyon and other Alliance leaders gave the order to fall back and regroup. The Alliance managed to form another shield wall at the base of the foothills, as archers harassed the oncoming orcs and ogres.

Khadgar called forth the powers of a storm, shooting three lightning bolts from his fingers toward different clusters of orcs and incinerating them. Turalyon used this distraction to reinforce the new shield wall and to order brush fires set in the orcs' path to the west. This was meant to prevent the Horde from flanking the Alliance from the west and surrounding them. The fires did hinder a number of orcs, who were shot by elven archers when they attempted to put the flames out, but it did little to slow the advancing ogres. The Alliance focused on these ogres with ballistae, arrows, and full units of soldiers. Khadgar likewise killed the lead ogre with a final lightning bolt. Regardless, the ogres took down many Alliance warriors, and it appeared that the Horde was massing for another series of assaults.

With the possibility that the Alliance shield wall could break with another attack, Lothar ordered a cavalry charge into the Horde's front lines. Lothar, Turalyon, and other mounted warriors crashed into enemy lines and carved a path through the orcs two times, with Alliance archers providing them cover as they fell back between charges. Before they could launch a third charge, the Horde sounded a drumbeat for retreat.

Durnholde Keep was raided by Orgrim Doomhammer himself in order free Zul'jin and his war party from imprisonment.[7]

The Horde regrouped and retreated to the east, toward the Hinterlands. There they would divide into two groups: one to attack the Hinterlands and distract the pursuing Alliance, and another to begin the main invasion of Quel'Thalas.

The Alliance viewed Hillsbrad as a major victory, having shown that their men could stand against the Horde and win. They had also prevented the Horde from marching north to attack Capital City, the Alliance's primary capital. Turalyon was eager to pursue the orcs and finish them off, but Lothar reminded him that the battle had left their own forces exhausted and short on matériel. After resting and resupplying, the Alliance would follow the Horde to the east.