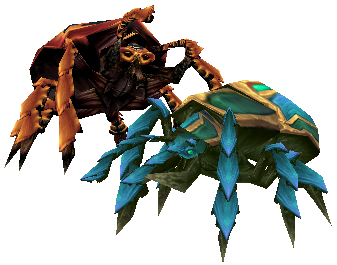 Beetles, also known as scarabs, are insects found in a few areas of Azeroth. A hardy insect that can dwell in just about any climate, the beetle is known to thrive on battlefields after the fighting has ended.[1] Some small beetles are critters, while larger ones are beasts. They are not silithid, although Silithid Scarabs and at least one species of nerubian look like beetles. Cataclysm introduced new egyptian-style skins for the beetles living in Uldum.

Beetles commonly feed on plants and other smaller insects, though some species have developed very strange appetites. One species feeds entirely on ash,[2] while a beetles in the Burning Steppes feast on rolled-up balls of cooled magma.[3] One enigmatic species is said to feed off the chaotic energies of the Old Gods,[4] while its cousin feeds on crystals which resonate with ancient energies.[5] One species can even go long periods of time without eating at all.[6] The Dung Beetle is a desert dwelling forager attracted to areas rich with dung.[7] The Savory Beetle is the most delicious of the beetle family.[8]

Easily mistaken for a common beetle, the sting of a sand scarab will quickly clear up the misconception should you be unlucky enough to be stung by one.[9] Gold Beetles are in fact not beetles at all, but tiny, autonomous machines created by the Titans to clean and maintain their mighty edifices.[10] The stinkbug is desert-dwelling insect which defends its eggs by spraying a foul, ogrelike scent.[11] The shells of scarabs of Tanaris are very hard. Because of that they were hunted down to near extinction and some of them moved to Zul'Farrak.[12]

Beetles and scarabs are among the most common types of wild battle pets found around the world.

Beetles are a type of hunter pet that first became tameable in World of Warcraft: Cataclysm. They are tenacious pets who harden up their skin, reducing damage taken from opponents for a short time with their ability

Some hunters, as well as other nearby players, often find the clicking sound they make while walking, running, and attacking to be distracting and/or annoying at times.