This article is about the goblin organization. For the in-game faction reputation, see Bilgewater Cartel (faction). 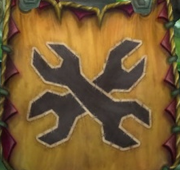 Banner of the cartel.

“The truth is that quite a few goblins combine a shrewd business sense with a certain level of... moral flexibility.”

The Bilgewater Cartel is one of the largest goblin organizations found on Azeroth. Run by the ruthless Trade Prince Gallywix, it is the most powerful trading company on Kezan. From their headquarters at Bilgewater Port, the cartel dominated the trade all over the South Seas,[3] until it was destroyed due to the Cataclysm. After the events in the Lost Isles, the Bilgewater joined the Horde and built a new capital in the Kalimdorian region of Azshara, Bilgewater Harbor. They compete with other goblin organizations such as the Steamwheedle Cartel and Venture Company over both resources and customers.[citation needed]

In the game, the Bilgewater Cartel is a Horde-aligned faction related to the playable Bilgewater goblins, introduced in Cataclysm. It is thus the sixth racial Horde-faction to be added to the game. They have their own quartermaster, rewards, and tabard which in dungeons will boost reputation for every kill.

Originally the slaves of Zandalari trolls on the Isle of Kezan,[4] the goblin race was forced to mine kaja'mite ore out of the volcanic bowels of Mount Kajaro.

The trolls used this potent mineral for their voodoo rituals, but it had an unexpected effect on the slaves who were in constant contact with it: kaja'mite generated a startling new cunning and intelligence in the goblins. Crafting their own powerful artifacts of engineering and alchemy in secret, the goblins soon overthrew their oppressors and claimed Kezan for their homeland. The mines that had been their prison, their slave camp, and the base of their rebellion now became the city of Undermine. Weaving through the heart of the island in a dizzying network of tunnels, vaults, and lava tubes, Undermine epitomizes the goblins' complex, unpredictable mindset.

The goblins' natural greed soon lifted them to prominence as masters of mercantilism. Trade princes arose during the First War as the cleverest goblins learned to take advantage of the strife. Great fortunes were amassed, and the Isle of Kezan became a hub for fleets of goblin trading ships. One of the trade princes agreed to lend his faction's services to the Horde in the Second War. Following the Horde's defeat, the goblins learned from their colleague's failed example, and soon they realized that their profits could double if they weren't stuck in such a restrictive relationship. By the end of the Third War, goblins were providing weaponry, vehicles, and devious services to both the Horde and the Alliance.[5]

Many years later, Jastor Gallywix rose through the ranks of the Bilgewater Cartel. Gallywix became the president of what became known as the Copper Street Conglomerate, an advisor to the Tinkers' Union, a major figure in the Trade Coalition, and the second wealthiest goblin in the Bilgewater Cartel - second only to Trade Prince Maldy himself. With the aid of the moguls of the Bilgewater and from Tek'zik Riddlevox, Director of the Tinkers' Union, all of whom believed that Maldy had gone soft (he was known to dote over his daughter, Nessa, with whom Gallywix had fallen in love with on first sight), Gallywix initiated a hostile takeover of the Bilgewater Cartel. He bought the loyalty of Maldy's staff, and replaced his security with his own mercenaries; he even owned the land on which Maldy's manor (the site of his own villa many years later) was situated. Though Maldy hoped to re-buy his possessions with the money he gained from trading weapons to the Alliance, Gallywix eliminated that possibility by destroying Maldy's trade fleet. Now in total control, Gallywix exiled Maldy and his daughter from Kezan, and later arranged his (supposedly accidental) death.[6]

The Bilgewater Cartel dug really deep into Kezan in order to mine more kaja'mite ore, create Kaja'Cola and please their customers. While digging, they discovered a small vein of Azerite, and Gallywix took its substance and kept it as a secret for years.[7]

[Kaja'Cola] in an attempt to boost their intelligence. Suddenly, Deathwing had made an appearance at Bilgewater Port, claiming the Hour of Twilight was drawing close. The goblins not very concerned with the threats continued on with their day. Eventually it was discovered that Mount Kajaro had begun to erupt and some goblins tried to cash in on the event. Trade Prince Jastor Gallywix of the Bilgewater Cartel charged desperate goblins fleeing for their lives 1 billion macaroons in exchange for saving their lives and leading them to safety on his private yacht. Gallywix however, was not true to his word and instead took the money and enslaved all those he saved. Gallywix then looked to start a new trade empire in the distant lands of Azshara with him being the most powerful goblin on Azeroth.

Arrival on the Lost Isles

Gallywix and his goblins were discovered by Alliance ships as they were attempting to capture the former orc Warchief, Thrall. The humans then fired at the goblins' ship to prevent any witnesses and after their vessel was sunk, the goblin survivors washed up onto the Lost Isles. The goblin survivors used the remnants of their destroyed vessel as a small base camp and fought off the local wildlife to secure their camp.

Cooperation with the Horde

Eventually, the goblins discovered an orcish journal revealing orc survivors in the isles. The goblin survivors thought it best to look to the orcs for help and sought out their base camp. The goblins then sent a representative to ask for help from the orcs. The orc survivors agreed to help if the goblins aided them in return. The adventurer had slain all the plants in the orcs' way and impressed the leader of the orc survivors- Aggra. Aggra then agreed to assist the goblins find their way off the isles. Much later it was discovered that human agents too had found their way onto the island during their mission to bring Thrall to Stormwind. Eventually, the goblin adventurer defeat the humans and rescues Thrall.

The goblins later decided to go to the larger of the two isles and deployed a Town-In-A-Box so they could have a location to rest themselves. The goblins were eventually met with Naga and Pygmy troubles but were able to fight them back. Eventually, the goblins aspired to end the pygmy threat and using many gadgets they managed to destroy the various tribes and found themselves in the center of the isle where they killed the pigmys' turtle god, Volcanoth. Yet the death of the turtle causes the island volcano to erupt.

Defeat of the Trade Prince

The goblins met up with the orcs once more to beat back the Alliance for good and being impressed with the goblins' cunning and strength, the orcs agreed to take the fight to Trade Prince Gallywix who enslaved the majority of the goblin survivors with mind control of some type. When Gallywix was finally beaten, he was told by Thrall that he could live if the Bilgewater Cartel became a part of the Horde. Gallywix bitterly accepted and the goblins and orcs parted ways, with Thrall going to the Maelstrom to heal the world and the goblins going to live in their new home of Orgrimmar - the capital of the orcs.

The cartel's home base was once Bilgewater Port on the Isle of Kezan, but after the natural disasters of the Cataclysm ousted the goblins from their homeland, the vast majority of its operations are now concentrated in Orgrimmar's Goblin Slums and Bilgewater Harbor in Azshara. The Bilgewater Cartel have honored their agreement with Thrall and have used their technological expertise and services to benefit the Horde, though Trade Prince Gallywix has also found ways to make sure his alliance with the Horde increases his coffers.

A Bilgewater cartel fleet wrecked itself at Land's End Beach in Tanaris, and all of its survivors became insane.[8]

During the Battlefield: Barrens, several Bilgewater Cartel goblins sided with Garrosh Hellscream and the True Horde, including sappers.

Following the inclusion of the nightborne into the Horde, goblins were seen in the Nighthold assisting the elves with new supplies.

As the Fourth War neared its end, the Horde became divided by Varok Saurfang's revolutionaries and Sylvanas Windrunner's loyalists, and in this case Gallywix sided with Sylvanas.[9] During the conflict, Varok challenged Sylvanas to a Mak'gora, which ended in his death and Sylvanas's abandonment of the Horde.[10] Sometime after this and the death of N'Zoth, Thrall and the rest of the leaders of the Horde discovered that Gallywix had left both Horde and the Bilgewater Cartel. Thus when the Horde Council formed to lead the Horde in absence of a Warchief, Thrall turned to Gazlowe, who agreed to take over the Cartel.[11]

They have a team named the Bilgewater Buccaneers in the goblin sport known as footbomb, a game where goblins sit in shredders and have to kick bombs on each other. They often compete against the Steamwheedle Sharks, the Steamwheedle Cartel's team.[12]