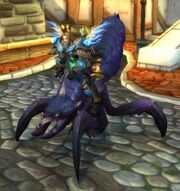 The Black Qiraji War Tank is a variant of the

[Black Qiraji Resonating Crystal] with an updated model. It does not replace the old mount, allowing the owner to use both at their own choice. Unlike most mounts, the Black Qiraji War Tank did not have an item that taught how to use it; the ability to summon it was automatically granted to those eligible.

[Scarab Lord]. It was automatically added to their Mounts tab upon logging in.

The Qiraji War Tank has only been seen recently during the Call of the Scarab, could this hint at a resurfacing of the deadly creatures?