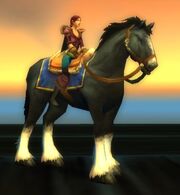 Black Stallion Bridle is sold for 1

by the following vendors:

Rumored to be favored by SI:7 for night missions due to its dark coat.

Due to the lack of players heading to the Wetlands to buy their horses, this one was the source of many misconceptions. Some wrongly said that in order to buy the horse you needed to be exalted with Stormwind, even as a human. Others said it was no longer available or that it costs more than other mounts. People would often think that it was a new mount because it was sold under special circumstances. None of these were or are true; as the mount has been in the game as long as the others. The only difference between it and the other horse mounts was that it could only be bought in the Wetlands. As of patch 4.0.3a, it can now be purchased in Stormwind along with all the other horse mounts.