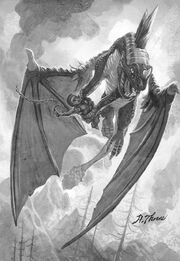 A black drake depicted in Traveler.

Black drakes are the youth of the black dragonflight. 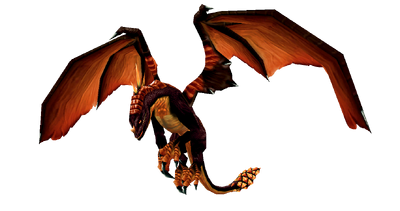 The average black drake's goal in life is no less than to become Deathwing's right hand (or replacement) and thus to control the rest of the flight in conquering or destroying the natural world. Black dragon society is ruled by the powerful, and its “laws” are enforced by brute strength, cunning, and magical power. By this age, a black drake has already proven itself to be a survivor; most blacks don't even make it to adulthood, with nearly every creature in the world, including its own kind, looking to take its head or its hide.

The black dragon's murderous intent is clear from its posture even before one has a chance to look into its eyes. Massive yet sinuous, the dragon spreads its wings and roars in challenge, jaws snapping the air in anticipation. The midnight scales reflect the ambient light brightly, making the beast look even more nightmarish.

Black drakes use every dirty trick, stratagem, and advantage they have to incapacitate or kill their enemies as swiftly and easily as possible. If all else fails, they retreat, no doubt with a plan for vengeance already forming in their minds. When working with a group, they are as showy as possible, trying to assert their dominance and skill over the others, while in reality trying to expend their own energy as little as possible. Drakes use their fiery breath as frequently as possible, but also use flight to their advantage, keeping a distance from opponents on the ground and making strafing flyby attacks. Those who train as spellcasters prefer offensive and manipulative spells, but most drake spellcasters also prepare a few spells intended to help them escape more quickly if all goes badly.

Black drakes speak Common and Draconic, and some speak other languages as well.[1]