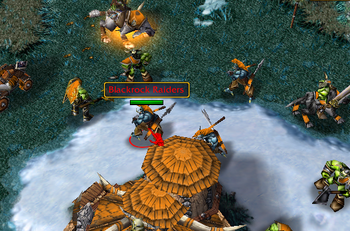 The Blackrock Raiders' base. Judging from the units' positions, they are most likely preparing the next attack.

The Blackrock Raiders was a subgroup of the Blackrock clan on Path of the Damned, the Warcraft III: Reign of Chaos undead campaign, in its sixth mission: "Blackrock & Roll, Too!". They were stationed on the north part of the map.[1]

This orc clan had far seer Throk'Feroth as their leader (see upper part of the screenshot).

The Blackrock Raiders was an averagely strong force, with a special unit which only the Blackrock Warlocks had access to: the Orc Warlock, who could cast Firebolt, Unholy Frenzy and Cripple. The Raiders' attack groups consisted of Grunts, Troll Headhunters, Raiders, Orc Warlocks and Catapults. Far Seer Throk'Feroth would remain at the base.