Not to be confused with Blackthorne. 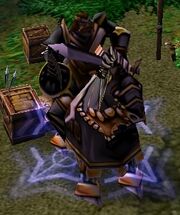 Blackthorn was a ruthless bandit lord commanding a sizable force of thieves and assassins. He was established in the Tirisfal Glades and, unluckily, got involved in the conflict between the Dreadlord Varimathras and Sylvanas Windrunner.

Sylvanas, lacking sizeable forces, used one of her banshees to possess Blackthorn, who then commanded his bandits to serve Sylvanas. Thus Sylvanas bolstered her forces against her temporary enemy, Varimathras.[1]

Statistics of Blackthorn from Warcraft III

Note:Blackthorn is being compared to a Bandit Lord which is the most powerful non-unique type of bandit.

(Before Blackthorn has been possessed)

Sylvanas: You may as well surrender now, cretin. You'll be my slave one way or another.

(After Blackthorn has been possessed)

Blackthorn: Lady Sylvanas is master here. We fight for her, brothers!

Sylvanas: Hmm... my own band of assassins. Intriguing.

As he does not appear in World of Warcraft, Blackthorn may have been killed by the Dreadlord Insurgents at some point during the war. Alternatively he could still be serving the Dark Lady in areas not yet visited by adventurers.