Blademaster Okani is an ankoan warrior and the leader of the Waveblade clan. He guides his brethren in their crusade against the naga and Queen Azshara from Mezzamere in Nazjatar. Eventually, Okani was crucial in recruiting the Alliance as new allies to the cause when they discovered the landwalkers shipwrecked and surrounded by naga. With all now in place, the Blademaster is dedicated to fulfilling his clan's oath of vengeance and upholding the honor of his clan.

Okani became the leader of the Waveblade Ankoan when his predecessor was slain by Queen Azshara's forces. The ankoan had battled the naga for some time, but this proved to be the final straw. As the new head of his clan, Blademaster Okani led the Waveblade into the home of their enemies, Nazjatar itself. Though they were severely outmatched, the Waveblade resigned themselves to vengeance or an honorable death.[1]

Despite the odds, Okani and his people established themselves at Mezzamere. From this base, they continued their war until the time when Queen Azshara parted Nazjatar's seas, making it dry land for the first time in millennia. At the same time, the Alliance and Horde also arrived in the area, stranded by Azshara's actions and surrounded by hostile naga. Okani would take a special interest in the Alliance, and he approached Lady Jaina Proudmoore and King Genn Greymane as they searched for a safe haven.[2] Recognizing their common goals, Blademaster Okani offered to join with the Alliance forces, bringing them back to Mezzamere and safety.

With their new allies, the Waveblade began to push back against the naga and deal blows to Queen Azshara's plans. The Blademaster continued working alongside the Alliance's champions and leaders, and accompanied them when they secured the Tidestone of Golganneth from the enemy.[3] With this, the way to Azshara's Eternal Palace was opened, allowing for the final assault to proceed.

Until the tides no longer ebb and flow, we will fight to the end, to extinguish the Vainglorious.

Our story is one of sadness. Perhaps it is better to save it for later, after you and your companions have recovered from your own loss.

Azerite is unlike anything I have ever seen before. 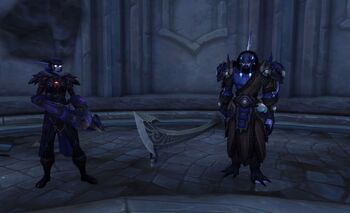