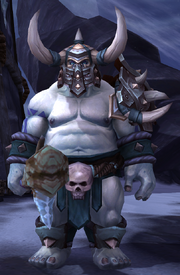 Three Bladespire Brutes are found in the time-locked Mor'dul Tower on the Forbidden Glacier in southwestern Frostfire Ridge. They each can be looted, but all have useless junk. The valuable ogre is the Bladespire Primalist atop the tower.

One is also found in Forbidden Glacier on the ground frozen, having been fighting a Frostwolf Grunt.

To check whether the specified ogre has been looted, copy and paste this command into the chat window:

If a "true" appears in the chat window, the specified ogre has been looted; "false" indicates the opposite.

With the Damaged Highmaul Artifact