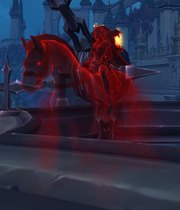 This mount is obtained by interacting with Dead Blanchy in the Endmire in Revendreth and offering her 6 different items, in order. The player can only give her one gift per day, but it does not have to be done over 6 consecutive days. All of the items can be collected beforehand and do not need to obtained on the same day that they are given to Blanchy. Dead Blanchy has a 1-2 hour respawn timer, with a 5 minute timer to despawn after getting stopped by a player, which is indicated by emotes.

After giving Dead Blanchy the Dredhollow Apples, the player automatically unlocks this mount.

In life, Blanchy appeared to be an affectionate, well-behaved horse of excellent disposition and appetite. What evils must she have committed in secret to have earned her place among the condemned souls of Revendreth?