For the clan from the main universe, see Bleeding Hollow clan.

The Bleeding Hollow clan is an orc clan led by Kilrogg Deadeye and makes their home in the jungles of Tanaan Peninsula. The clan is named after the hidden chamber in which the chieftains sacrifice an eye to receive a vision of their death.[1] They are a fanatical and crude clan who fight with a berserker fury and gain the boon of prophecy from their elders, who sacrifice an eye to see into the future. They imbue themselves with berserk fury, slather their weapons in hallucinogenic venom, and stalk prey from the treetops, branding their victims' final moments with visions of pure horror.[2]

The Bleeding Hollow use blood in their spells, including a ritual to create dire orcs.[3] 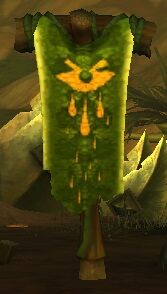 The clan has long been in conflict with the arakkoa for many years. Kilrogg Deadeye finally won them victory against their foes.

After the death of Archimonde, the non-corrupted of the clan help rebuild Draenor.

In time, the Bleeding Hollow clan joined with the other Mag'har orc clans under the command of Warchief Grommash Hellscream.[4] As the Mag'har and Lightbound clashed, events on Azeroth would see to a new war between the Horde and the Alliance. In the midst of this, Eitrigg sought to travel to the alternate Draenor and call upon the debt the Mag'har owed to the Horde for liberating them from Garrosh Hellscream's meddling and the Burning Legion's corruption.[5]

As the entire Lightbound army was marching towards the Mag'har, Grommash ordered for the Mag'har to follow Geya'rah and fallback to Azeroth. Thus when Warchief Hellscream and Lantresor of the Blade charged at the Lightbound, Eitrigg activated the shard of the

[Vision of Time] in his possession in order to return to Azeroth with his new allies.[6] After their arrival on Azeroth, Overlord Geya'rah took her place as leader of the Mag'har and pledged the loyalty of her people to Warchief Sylvanas Windrunner and the Horde.[7]