From Wowpedia
Revision as of 23:19, 1 July 2019 by Surafbrov (talk | contribs) (→‎Franchises: Saviors of Uldum have its own page on Wowpedia)
(diff) ← Older revision | Latest revision (diff) | Newer revision → (diff)
Jump to: navigation, search 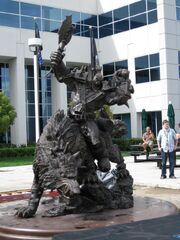 Blizzard Entertainment® (often shortened to "Blizzard" or "Blizz") is a video game developer & publisher that is responsible for the Warcraft, StarCraft, Diablo, and

[Overwatch] franchises. The company originally concentrated primarily on the creation of game ports for other studios before beginning development of their own program with the development of games like Rock n' Roll Racing & The Lost Vikings.

It was not until Interplay Entertainment and Silicon & Synapse collaborated on the SNES side-scroller The Lost Vikings that it's critical — though not commercial — breakthrough came. With some acclaim, the game hit the shelves in 1993. The game's release, along with Rock & Roll Racking (also 1993) led Nintendo to name the studio its "Developer of the Year". Tragically, the release of the two games coincided with the death of the 16-bit console market, and neither title sold well.[11]

Blizzard North was originally founded in 1993 as Condor Inc. by David Brevik, Erich Schaefer, and Max Schaefer. Blizzard North came out in January of 1995 with an idea pitched with Allen for Diablo.[21] The company was purchased and renamed later in March of 1996[7] and was the Bay Area division of Blizzard Entertainment, known for its Diablo series. The studio was originally based in Redwood City, California, before being moved a short distance away to San Mateo, California, with Blizzard proper being based in Irvine, southern California. On August 1, 2005, Blizzard Entertainment announced the closure of Blizzard North with a key reason for the closure was Blizzard's North poor development of what was to be Diablo III, which didn't meet Vivendi's expectations. There was also a couple mentions of Blizzard South, which was known for the StarCraft and the Warcraft series. However, the name wasn't mentioned as much but it was used to keep confusion from Blizzard North as Blizzard South is based in Irvine, California, Blizzard's main location.

In 2013, Blizzard announced an official partnership with TeSPA to provide licensed StarCraft, Hearthstone and Heroes of the Storm in-game rewards to college gaming clubs.[22][23][24] In early 2014, TeSPA and Blizzard Entertainment hosted the $5,000 North American Collegiate Hearthstone Open series, culminating in a live grand finals event at the Twitch.tv stage at PAX East and PAX Prime.[25]

In addition to the numerically designated teams, "strike teams" were formed, as a result of Chris Metzen's desire to keep the company's original culture intact. These teams are not assigned to any one project, but give feedback on separate projects. A "design council" also exists, a gathering of all of the game directors and lead designers throughout the company.[4] As of August 2017, most of Blizzard's development focus is on supporting its existing IPs, but is working on new IPs as well.[26] As of November 2018, Blizzard's current development model is to effectively have one team per IP and support indefinitely. As a team grows and reaches a certain size, elements of the team will be spun off to work on a new IP. Each team consists of around 100–300 people.[27]

Blizzard Entertainment, Inc. remains Blizzard's brand,[31] as it and Activision continue to exist as separate entities within the Activision Blizzard umbrella.[32]

Note: Blizzard has confirmed that they are NOT working on a StarCraft or Diablo MMORPG.[41]

About 50% of all Blizzard games have been cancelled during development.[27]

These are the following awards received for Blizzard Entertainment and Warcraft related.[62] For other game awards, see Diablo and StarCraft.