Blizzard World is a Blizzard-themed amusement park in Overwatch circulated around three franchises and two other games: Warcraft, Diablo, StarCraft, Hearthstone, and Heroes of the Storm.

The following Warcraft areas have attractions or districts that can at least be partially visited in the in-game map: Flight to Duskwood, Booty Bay, Snaxxramas, Stone Cairn Lake, Valley of Heroes, Ancient Curios, Fargodeep Mine. While not strictly canon to Warcraft, the Hearthstone inn is also there.

Even though not depicted in the in-game map, many attractions shown in the in-universe map of Blizzard World are Warcraft references, including: 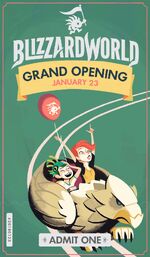