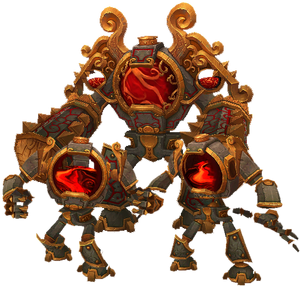 Blood golems,[1] also known as anima golems, are mechanical creations of Archritualist Kelada, under the Thunder King's command, and were forged in the Throne of Thunder. They were made animate through anima, a vital substance used by the Mogu in their flesh-shaping rituals. The small golems serve the great Dark Animus. After its defeat, the blood elves acquired the Dark Animus' power source and began empowering blood golems of their own.

During the fights on the Isle of Thunder, agents under Lor'themar Theron defeated the Dark Animus and secured its power source within a crystal. Blood elf archmagi were tasked with uncovering the secrets behind the origin of the animus golems' powers, also allowing the elves to empower functional blood golems of their own.[2] The animus' power was adequate leverage for Lor'themar, who had sought to find powerful weapons on the isle to prepare for an uprising against Garrosh Hellscream.

Although no blood golems from the blood elves were seen, Garrosh had acquired several blood golems as the spoils of war and had them stored in the Artifact Storage of the Underhold where they were destroyed by the Alliance and Horde.

The blood golems make an appearance during the war in Draenor where they are employed by the Sunsworn. Lady Liadrin fields groups of animus golems to help purge the demonic corruption in Talador and to defend Auchindoun. Magister Astalor Bloodsworn can be found empowering dormant golems at Exarch's Refuge.

The animus golems are again a part of the Blood Knights' forces during the Burning Legion's third invasion fighting alongside the knights and the Nightfallen rebels within Suramar City.

Enemy blood golems were used by the mogu during the Assault in the Vale of Eternal Blossoms. They were employed by the Dokani clan.

[Son of Animus] is brought to Castle Nathria fighting Lady Inerva Darkvein, the Son of Animus starts casting Absorbing Anima, and when the channeling is done it turns into a Dark Animus.