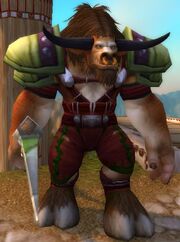 Those who visit the capital city of the tauren know better than to misbehave.[1]

Bluffwatchers are guards located throughout the tauren city of Thunder Bluff. They can provide directions to various locations in town. They are also aboard the Zephyr.

They defended the town during the Elemental Unrest, warning its citizens.

During the feast for the Highmountain tauren, they guarded the city, but also enjoyed themselves by drinking and laughing. When the Void minions manifested, they defended the town.[2]

What are you looking for?

It is found on the lowest section of Thunder Bluff. Search near the bank. It is not far from there.

The Thunder Bluff Bank can be found on the lower rise.

Which trainer do you seek?

A follower of the arcane are you? Hmph! Very well then... you can find them around the Pools of Vision underneath the Spirit Rise.

You will find the Sunwalker's Lodge on Hunter's Rise.

The Seers of Elder Rise will help you. Seek them out in the Hall of Elders there.

Aspiring to join our ranks one day? Sark Ragetotem can help you on your way. He's in the Hunter's Hall.

You will find Tseh Rah on the Spirit Rise. She has been meeting with the Shaman Trainers[sic] there.

Look for Innkeeper Pala in the building just south of the Thunder Bluff Bank on the lower rise.

You can find a mailbox just outside the Thunder Bluff Bank on the lower rise.

Otoh Greyhide spends much of time[sic] in the Hall of Elders on the Elder Rise. Seek him out there, and he will help you.

Looking how to learn to work an anvil and hammer, eh? Karn Stonehoof can teach you how. He has a smithy set up on the lower rise by the pond.

There is no finer cook in Thunder Bluff than Aska Mistrunner. Mmmmm, I can smell what she is cooking from here. Head over to her kitchen located on the high rise.

You must be looking for Palehoof, who keeps our elevators and windmills in good working order. Find him upon the lower rise.

First Aid is always a nice skill to have. Many a time during battle has it saved my hide. Visit Spiritual Healing on the Spirit Rise. Pand Stonebinder can teach you all you need to know to save your hide as well.

Don't blame you for taking up fishing. Mulgore has some of the best fishing spots in Southern Kalimdor and Mountaintop Bait & Tackle on the high rise has all of the gear you'll need to take advantage of it.

Tell Kah Mistrunner that I sent ya!

Seek the Cloudchasers upon the lower rise. They should be able to help you in all matters of jewelcrafting.

Go see Una at Thunder Bluff Armorers then. It can be found on the middle rise.

Mooranta can help you learn skinning. She can be found just outside the Thunder Bluff Armorers on the middle rise.

Tepa is renown[sic] for her clothwork. She can be found at Thunder Bluff Armorers on the middle rise.

The Wind Rider Roost is atop the totem stairway in the center of town.

Located here in Mulgore we do not have many options for travel but I will help you as best I can.

Where are you looking to travel?

Orgrimmar or the Eastern Kingdoms

You'll find Krendle Bigpockets near the zeppelin's perch on the western edge of Spirit Rise. I'm not fond of the goblin contraption flying through here... but it will take you to Orgrimmar if you can stand it. From Orgrimmar you can risk another zeppelin to Undercity or Silvermoon City in the Eastern Kingdoms or one to Warsong Hold in Northrend.

A portal can be found in the cave beneath Spirit Rise that will take you to the wasteland of Hellfire Peninsula in Outland.