Difference between revisions of "Bolvar Fordragon" 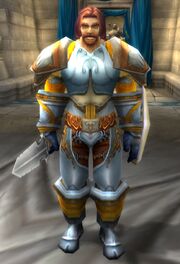 Highlord Bolvar Fordragon is a boss and quest giver located in Stormwind Keep in the human city of Stormwind. He is considered a faction leader, and killing him will grant players an Honorable Kill. He is the bodyguard of King Anduin Wrynn, and helps him rule until either the boy comes of age, or the king's father, Varian Wrynn, is safely returned to the kingdom, whichever happens first. Bolvar Fordragon is aided in this endeavour by the mysterious Lady Katrana Prestor.

During the High Overlord Saurfang Fact Craze, Alliance players tried to make Bolvar Fordragon a pop culture icon of their own. It was greeted with mixed results, and eventually failed to gain the same popularity as his Horde counterpart.

He starts the following quests: