I stole an old treasure map off an Irontide pirate. The map marks several caves on it with circles.

The caves are blocked by boulders, but now that you're here, we're going to open them up.

You get to do all the dangerous stuff, plant explosives, kill things and cave exploring. I'll supervise.

Pick up all of 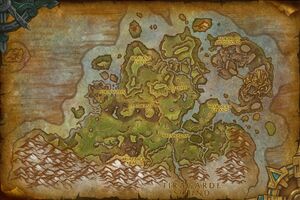 in a cave off on the eastern side of the quest area. It drops the

The western cave is guarded by First Mate Grogtok.

Aggro
First Mate Grogtok says: I guard the rum until the captain returns.

Death
First Mate Grogtok says: Captain... I didn't drink any.
Moxie Lockspinner says: No gold, but a lot of rum!

[Long Forgotten Rum] can be tapped to acquire a mugful.

At the eastern cave:

Moxie Lockspinner says: I feel positive about this cave. I am picturing an awful lot of gold inside.

Inside, guarded by two Shale Crawlers, is a Large Pile of Gold, which starts