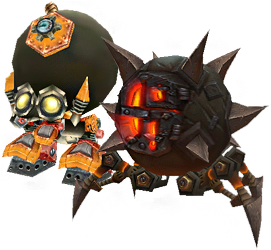 A bombling, also known as a bomb bot, is a bomb attached to robotic legs for traveling around. The typical bombling is a simple black, round bomb with a fuse out its top, headlight-like eyes, and a pair of small legs (reminiscent of an alarm-o-bot) to get around. The bomb section seems to be held by a separate robotic section with a claw, but the two parts may be connected beyond that. The fuse is seemingly for looks or redundant as a timer can also be seen on the front.

Siegecrafter Blackfuse introduced a new version of this destructive device with spider-like legs rather than walker legs of the normal bombling. The explosive device is also capable of digging itself into the ground becoming a mine.