Wowpedia
Register
Don't have an account?
Sign In
Advertisement
in: Warcraft TCG Heroes of Azeroth, Speculation, Dwarf characters,
and 3 more 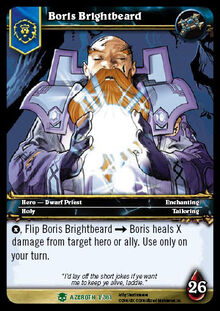 Boris Brightbeard is a dwarven priest that once fought Onyxia in her lair.

His card in Heroes of Azeroth
His miniature: Minis Core Set/Boris Brightbeard

Quotes from him and references to him can be found on the following cards: