The botani are a race of intelligent, bark-skinned humanoids native to Draenor. They are members of the group of creatures known as the Primals, who wage an eternal war against the stone giants known as the Breakers and seek to establish dominance over them and all other organic life.[2] The botani fervently serve the enormous genesaur, which they worship as gods, and are notorious for their ability to infest humanoid races, turning them into shambling slaves.

The botani were seemingly hunted to extinction by the Old Horde in the main universe, but they are still present in the Draenor of an alternate timeline.

In the aftermath of Botaan's destruction, spores from the Sporemound's corpse settled in the wilds, giving sentience to existing forms of plants. The jungles stirred as new beings took shape and walked the land. The most intelligent and prolific of these were the botani, who spread through Draenor's wilderness. Faint memories of the Evergrowth lingered in their minds, but they did not know the full truth of the Sporemounds or their battles with Grond and the colossals. Even so, they worshipped their genesaur relatives as gods, seeing them as echoes of the great Sporemounds. The botani, genesaur and other plant-creatures were known collectively as the Primals, and their devotion to protecting the forestlands inevitably caused them to clash with the Breakers, the descendants of Grond. For many long ages, the two factions engaged in sporadic battles with one another, neither side ever managing to destroy the other.[3]

The birth of Taala 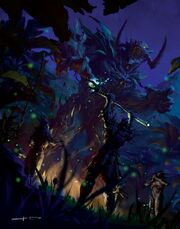 The botani bring Taala to life.

2,000 years before the opening of the Dark Portal, a treant known as Gnarlgar wandered the forests of Talador, strengthening its fellow Primals and honing its own abilities to influence the minds of its kin. Gnarlgar found the botani to be the most promising of the world's Primals and knew that they could become a force of extraordinary might if cultivated properly. Gnarlgar became the botani's caretaker, refining their culture and teaching them the truth about the Sporemounds, as well as convincing them that they would one day restore the Evergrowth to its former glory. Though the botani existed throughout Draenor, those in Talador were the most numerous and advanced. They became the heart of their race's culture. Gnarlgar taught Talador's botani unique ways to harness nature magic, and they created pools of potent nature energies to transfer the spirits of fallen genesaur into new bodies.[4]

While the botani battled the Breakers, Gnarlgar became aware of the arakkoan Apexis civilization, which it saw as an immense affront to nature and an even greater threat than the Breakers. After discovering a massive fossilized root — one of the last remaining pieces of Botaan — the treant rallied the botani and proclaimed that to revive the Evergrowth, they must first defeat the Apexis. The treant then told its followers that they would use the root to craft a new Sporemound, greater than any that had come before it, to cast the Apexis from their lofty spire. Gnarlgar planted the root deep within Talador and began a great ritual to nourish it. Thousands of botani willingly sacrificed themselves, and Gnarlgar infused their spirits into the root. Gradually, a Sporemound took shape and Gnarlgar named it Taala. Meanwhile, the Primals prepared for war, with the botani awakening new genesaur from their birthing pools while Gnarlgar created a group of living trees known as the Gnarled.[4]

After Taala finally awakened, the botani marched on the Apexis spire along with the other Primals, but much like their kin, thousands of them were incinerated by the Breath of Rukhmar.[4]

Thousands of years later, the Orcish Horde marched across Draenor. Kilrogg Deadeye led his Bleeding Hollow clan on a campaign into the lush, isolated island of Farahlon, the last bastion of the Primals. After crossing the ocean with the help of ogre shipwrights, orc warlocks leeched life from the Primals and used the stolen power to set the forests ablaze while Kilrogg and his army slaughtered every botani and genesaur they could find.[5]

On the alternate Draenor, the botani are found primarily in Gorgrond, mainly as servants of the genesaur Iyu. Since the Iron Horde and the Breakers began working together, the botani have become even more aggressive – orcs and draenei both have been disappearing of late into dense botani enclaves.[6] The botani of the Blademoon Bloom in Shadowmoon Valley, once revered by the draenei,[7] began attacking wandering travelers and dragging their bodies back into the bloom to fertilize a growing genesaur. Luckily, the rangari were able to kill the genesaur with the aid of an adventurer before it managed to grow to maturity.[8]

They claimed the abandoned ogre fortress at the Overlook Ruins as a new incubator.[9]

After the Mag'har of the alternate Draenor arrived on the main universe Azeroth, botani could be seen running off toward the Northern Barrens.[10] 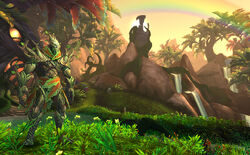 A botani enclave in the Gorgrond woodlands.

“Your bodies shall feed the bloom. Aren't you thankful?”

Slender, deliberate, and calculating, these enigmatic living trees single-mindedly tend to the wilds of Draenor. Wise in the ancient ways, they seek lost artifacts of bygone ages to empower the explosive growth of their territory, often at the expense of Draenor's other sentient denizens.[6] The faint memories of the Evergrowth that lingered in the minds of the ancient botani had a profound impact on their culture. The bark-skinned beings reject the sense of self, believing that their individual souls are part of a collective spirit interlinking all plant life on Draenor.[3]

The botani revere the enormous genesaur as gods,[11] seeing them as echoes of the great Sporemounds,[3] and only the highest-ranking botani (such as the Voice of Iyu) may speak on behalf of the lumbering creatures.[1] Using birthing pools of potent nature energies, the botani are able to transfer the spirits of fallen genesaur into new bodies.[4]

The botani use wasps and ravagers to pollinate their blooms. The pollen these insects carry has a number of powerful properties, and the Laughing Skull orcs who dwell in Gorgrond have long learned a few secrets of the botani that they can use to grow their own plants. With a dash of a few secret ingredients one can feed an army with the food grown from the pollen, if one knows the secret ways, and there is no such thing as a hungry Laughing Skull for this reason.[12] 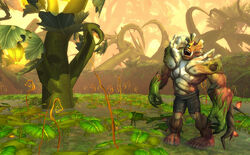 An unfortunate orc in the later stages of infestation.

“As lord of the Everbloom my charge was the weaponization of nature. You have likely seen the fruits of my labor in your journeys across my world. My discoveries have allowed my kind to control the invasive species of Draenor through subversive infestation. I speak of total systemic control of the invading organism - the mind and the body.”

For tens of thousands of years the botani have clashed against the mightiest forces of the world.[14] The botani have long cultured unique plantlife in their irrigated ponds or tree dwellings, but far more terrifying is their ability to cultivate flora within a living host. Unwary natives are captured and seeded in an agonizing process that alters their physical makeup and takes complete control over their bodies, turning them into mindless walking saplings. The entire process is poorly understood, but these grisly infested can be seen guarding botani enclaves or shambling ahead of the botani host as gruesome cannon fodder whose corpses eventually seed new terrain.[6] Phylarch the Evergreen claims to be the inventor of this technique.[13] Orcs and ogron[15] are known victims of this process, but the botani have also been known to create mandragoras by infecting riverbeasts with some kind of strange flesh-eating plant.[16]

Prisoners that aren't infested are instead fattened up with fruit, honey and mead before being turned into mulch.[17][18] The Laughing Skull orcs always burn their dead to prevent them from being raised and infested.[19]

In Tangleheart, the botani use a special sap to quickly grow ancients to full size.[20] The botani known as Ontogen the Harvester works with the ancient saplings, imbuing them with anger and hatred toward creatures unlike them.[21]