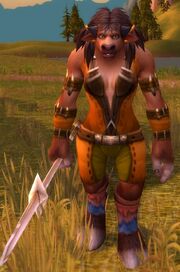 Respect your prey, and the danger it carries, but never fear it. In fear, you become prey yourself.[1]

Brave is a title of respect for tauren who take up arms, whether to fight or to guard. They are the primary guards at most tauren settlements. The first trials tauren player characters undergo are those to become a tauren brave.[2] 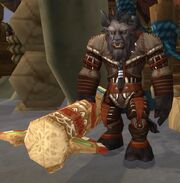 The use of 'Brave' appears to be a long-standing tradition, as it is also used by the taunka and the Highmountain tauren, though the latter instead use the name warbrave. In fact, it appears that the position of brave was an established part of shu'halo culture even before they were driven from their homelands by the centaur, as the "Hatred of the Centaur" myth describes how the early tauren's braves and hunters were unable to fend off the invading centaur.[3] The braves are equipped with the armor crafted by Mosarn and his apprentices.[4]

Becoming a tauren brave involves overcoming several trials to test mind, body, and spirit. The exact nature of the rites has changed with time, but the meaning behind them has remained the same. Tauren brave initiates of Thunder Bluff start their training at Camp Narache on Red Cloud Mesa.

Pre-Cataclysm the rites were referred to as the Rites of the Earthmother,[5] which was comprised the following three:

Following this, the Rites of the Earthmother were complete. Honorable status must be upheld by continuing to do deeds of worth.[6]

Post-Cataclysm the rites have changed slightly, though they are still referred to as the Rites of the Earthmother.[7][8] Notably, the rites are fulfilled in a much more makeshift fashion due to the quilboar invasion of Red Cloud Mesa and the treachery of the Grimtotem tribe. The current path:

During the Fourth War, tauren warbraves were on the move from Thunder Bluff to the Barrens. Alliance champions were sent to hold them at the Great Gate of Mulgore.[9]

The following is a list of braves known by name:

Braves are the primary guards at several settlements: