For the town itself, see Brennadam. 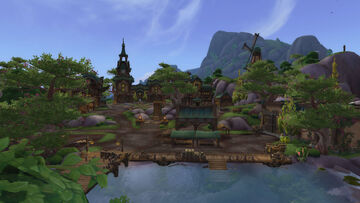 Brennadam Square is the town center of Brennadam in Stormsong Valley. The square contains most of the town's facilities, including the market and town hall. During the Fourth War, the Horde would invade Stormsong and sack Brennadam Square, killing many civilians.[1]

With the help of the Alliance and local militia, the enemy would eventually be halted and any further success in Brennadam cut short. Injured survivors of the attack have been taken in at Eckhart Lodge to the north.[2]

Brennadam Square forms the main district of Brennadam, the largest town in Stormsong Valley and the economic heart of the region. Both Brennadam and the valley helped feed the entire kingdom of Kul Tiras for generations. As the nation's breadbasket, the settlement would become a strategic target for the Horde when they invaded the island during the Fourth War.

On orders from Warchief Sylvanas Windrunner, a force of Horde soldiers launched a surprise attack on Brennadam from their base at Warfang Hold. Caught unawares, many unarmed civilians were killed when Horde zeppelins devastated Brennadam Square. This was quickly followed by ground troops, who continued to slaughter any Brennadam villagers they could. The attack, led by Champion Lockjaw, soon threatened to overwhelm the entire town. 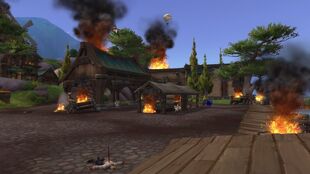 The square under attack from the Horde

Though caught by surprise, Brennadam's citizens managed to form a small militia to stop the Horde's rampage from spreading. Led by Mayor Roz and Sergeant Calvin, they established a cordon leading across the bridge from Brennadam Square to the southern part of town across the river. However, the attackers continued to ravage the square until help came from champions of the Alliance, recently arrived in Stormsong.

With the villagers' help, they thinned the Horde's ranks while also putting out many of the fires destroying the town, and disarming Horde bombs dropped from the air.[3] They targeted Lockjaw himself, and retrieved the orders from the Warchief off his corpse. Finally, as enemy reinforcements threatened to arrive from the north, the defenders commandeered an Experimental War Machine belonging to the Horde that was set up on a hill overlooking the town. The machine's guns were trained on the arriving reinforcements, decimating them and stopping the Horde's attack from succeeding.[4]

Attacks from the Horde in Stormsong Valley would continue on Brennadam Square throughout the war, though the invaders were always contained and prevented from taking the rest of Brennadam.