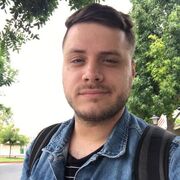 Bret Forbus, also known as Ornyx, is a former Community Manager for the NA World of Warcraft forums at Blizzard Entertainment. He joined Blizzard in December 2015 but his welcome post wasn't posted until January 11, 2016.[1]

On September 14, 2018, Ornyx announced that it was his last day with Blizzard Entertainment.[2]