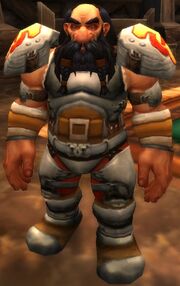 Brewmeister Bilger was a dwarf located in Southshore in the Hillsbrad Foothills. He wandered around in the inn cellar, hiccupping occasionally.

Bilger was once known as Bilger the Straight-laced, a sober paladin during the height of the Silver Hand's activities in Southshore. He can be seen consorting with the likes of Nathanos Marris and Raleigh the True in the Old Hillsbrad Foothills instance. From all that has happened over the years, its no wonder he's turned to the brew.

Since the Cataclysm, Bilger is nowhere to be seen and was likely killed in the Forsaken plague bombing of Southshore.

Due to his former uniform, he may have been a part of the Ironforge Guard.