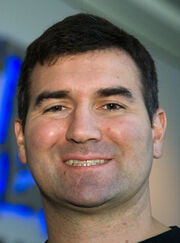 “Holinka would build his garrison in Ashran if he could. It would be perpetually on fire.”

Brian Holinka is Lead Combat Designer on World of Warcraft at Blizzard Entertainment. He is involved in all combat related systems including class design and PvP content.

Holinka joined Blizzard and the WoW team in August 2012.[2] His background before this was as a first-person shooter (FPS) designer,[2] including working on the multiplayer components of Transformers: Fall of Cybertron, Homefront, and Frontlines: Fuel of War.[3] He was previously a member of High Moon Studios[4] and Trauma Studios,[5] and was brought into Kaos Studios when it was formed from the latter group's core members.[6] Holinka got his start in the game industry moonlighting on the “Desert Combat” mod for Battlefield 1942 while serving as a Captain in the United States Air Force.[3]

On June 15th, 2017, he announced that he was moving to another project at Blizzard.[7] In October 2018, he returned to World of Warcraft as Lead Combat Designer, heading up the team responsible for all combat related systems including class design and player versus player content.[8][9] 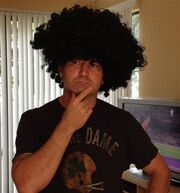 Sadly, not his real hair