For the first battle here, see Battle for the Broken Shore. For the second battle, see Assault on Broken Shore.

“Black clouds swirl over the Burning Legion's foothold on Azeroth. Demons of every shape and size march along the rivers of fel magic that boil over the Broken Shore. Above everything looms the dreaded Tomb of Sargeras, an ancient night elf temple that serves as the Legion's gateway into the world.”

The Broken Shore, originally known as Thal'dranath,[2] is where the Tomb of Sargeras - and thus the Burning Legion's gateway into Azeroth - is located. Gul'dan raised this island up from the bottom of the sea during the Second War,[3][4] and it served as the demonic army's base of operations during the Third invasion of the Burning Legion.

The Broken Shore, or Thal'dranath, was once a portion of the city of Suramar, and the location of the Temple of Elune. During the Great Sundering, it was sent to the bottom of the oceans along with the majority of ancient Kalimdor's landmass, as it was situated outside the boundaries of the shield raised by Grand Magistrix Elisande's highborne. 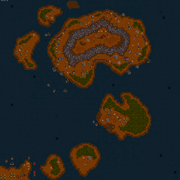 The Broken Shore during the Second War.

During the Second War, Gul'dan raised the entire island from the bottom of the sea as he sought the power locked away inside the Tomb, promised to him by Medivh.[3][4] As he opened the Tomb, he was torn to shreds by the demons inside. He had been set up and punished by the Legion for his betrayal.

Doomhammer loyalists of the Blackrock and Black Tooth Grin clans then fought the forces of the Stormreavers and Twilight's Hammer, who had sided with the orcish warlock.[6] The orcs killed during the battle were eventually raised by the vile magics of the demons,[7] and kept reliving it in their undeath.[8]

Forces later sent by Ner'zhul recovered the Jeweled Scepter of Sargeras, as he wanted to use it to escape the dying world of Draenor and eventually conquer other worlds.

During the Third War, Illidan Stormrage entered the Tomb and recovered the Eye of Sargeras. Pursued by Maiev Shadowsong and her Wardens, he attempted to collapse part of the Temple on them for attempting to stop him from destroying the Lich King, and for trying to imprison him once more.[8]

After the war in Draenor, alternate Gul'dan, guided by his master Kil'jaeden's voice, managed to re-open the portal within the Tomb of Sargeras, ushering in the largest invasion of Azeroth by the Burning Legion since the War of the Ancients. Their ultimate goal was to finally summon the dark titan himself, Sargeras, to Azeroth.[9]

A massive army was sent by the forces of Azeroth to combat the Burning Legion, including but not limited to the Alliance, the Horde, and the Argent Crusade. The Battle for the Broken Shore culminated in the Legion overrunning Azeroth's defenders and forcing them to withdraw. Many of the greatest heroes in Azeroth, such as Tirion Fordring, Vol'jin, and Varian Wrynn, fell in battle before the Legion or were mortally wounded.[10] Some escaped, others went missing or were captured, but many more died upon the Broken Shore.

A paladin hero would return to the Broken Shore sometime after the disastrous battle to try and save Tirion Fordring, who was held captive by the Legion and had lost the Ashbringer. The Ashbringer was reclaimed and used to battle Balnazzar, who escaped before he could be defeated. On his deathbed, Tirion proclaimed the hero as the new wielder of the Ashbringer, before passing away.[11]

The Order of the Silver Hand also sent their troops here, as the Broken Shore was littered with debris from battle, to gather plenty of

[Lumenstone] despite the demons still patrolling the area.[12] They also sent troops to help an order of priests from the Conclave who have been spotted combing the landing site of the Broken Shore, searching for survivors amidst dangerous demons, among them Temptress Salacia engaged in a battle with the priests and taken down by the paladins who joined the fray.[13]

A demon hunter hero ventured to the Broken Shore to reclaim the Aldrachi Warblades from Caria Felsoul, a traitor to the Illidari.[14]

A warrior hero fought alongside many vrykul on the Broken Shore but was overwhelmed. They were saved from the brink of death by a val'kyr sent by Keeper Odyn and brought to the Halls of Valor.

Vereesa Windrunner and a hunter hero, seeking Vereesa's missing sister Alleria, used the Broken Shore as a launch point onto the Legion world of Niskara where Alleria was rumored to be held.

Knights of the Ebon Blade launched a separate expedition to Niskara in order to locate Gorelix the Fleshripper in order to recover another artifact that was held in his hands.

The demonic forces of the Burning Legion built massive structures on the Broken Shore as a base of operations for their assault on Azeroth. It’s here that the Horde and the Alliance experienced a series of tragedies at the hands of the Legion. Where factions failed, order halls regrouped, acquired new weapons of power, and recruited new allies, to make a triumphant return.

All order halls gathered together to form the Armies of Legionfall. The Legionfall base, serving as the initial foothold on the island, is from where they would work their way through the Legion’s defenses and eventually reach the stronghold. To do this, class orders needed to work together to build up their forces by fortifying ancient elven buildings and upgrading them into Nether Disruptors, Command Centers, and Mage Towers.[15]

The destruction of Mephistroth's Legion ship and its resulting crash into the Broken Shore heavily changes the center of the island's geography, destroying the fel lava pit and causing rubble from the ship to scatter across the area.

Map of the Broken Shore.

The Broken Shore scenario was available since the World of Warcraft: Legion launch event which lasted a few weeks.[16] Those who had already accomplished it didn't do it again after Legion was launched.

Once players accept the relevant part of

[98] The Battle for Broken Shore, they are teleported into a scenario version of the Broken Shore together with other players.