Budd Nedreck is an adventurer who wanders Azeroth with his group. As such, he appears in several zones and his storyline is often entwined with other recurring characters such as Adarrah and Harrison Jones.

Budd Nedreck was the well-spoken, often snooty explorer that Griftah sent players to, just outside of Zul'Aman.[1]

[Griftah's Note] was short and to the point. "Listen up, Budd! This be the last fool I send 'til ya pay me all ya be own'. No more stallin!"

Budd was looking for treasure, and all sources pointed to Zul'Aman - but Budd wasn't about to go in there and get it himself. Instead, he sent adventurers in to do the dirty work for him, taking anyone who could even work a shovel.[2] His first task was retrieving a map that was lost by previous recruits who had failed to return from their own.[3] Then he had players fill in the missing parts of the map,[4] after which he sent them to dispatch Hex Lord Malacrass. Throughout it all, Budd was obviously the brains of the operation - insistent that one day the player would also get to partake in wealth beyond their wildest dreams. But he changed his tune once the Hex Lord was defeated, intent on stealing all the glory for himself.[5]

Players who returned to Zul'Aman, killed Zul'jin and retrieved the Blood of the Warlord were entreated to return it to Budd by the quest text: "As you examine the pulsating vial, your thoughts turn to the petulant little man outside Zul'Aman. You can't wait to see Budd's expression when he sees this!" Budd proceeded to take the vial of blood and toss it on a burning building, bragging about his triumphs to the sky and taking all credit for Zul'jin's demise. While ordinarily this would be irritating for players who worked so hard to progress through the raid, in this case, it was far better that he claimed credit. After throwing the blood in the fire, Budd was swept up into the air by malevolent spirits and thrown into the fire, after which he proceeded to run around ablaze.[6] 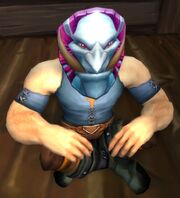 Budd and his band of treasure seekers and troll slayers have moved camp to Grizzly Hills in search of new profits. But his fate at Zul'Aman had an unfortunate side effect: Budd had pretty much lost his mind and thought he was a troll complete with a troll mask. His band of cohorts, not wanting to leave Budd behind, used him as troll bait by using his fragile state of mind to sic him on the local trolls of the area. Budd thought he was playing "Troll tag," but mostly what he was doing was knocking trolls silly with a frying pan, all the while happily shouting "tag!" to any he happened to hit.[7]

Budd makes an appearance at the opening sequence to the Vashj'ir zone, where after his mercenary vessel, which carries adventurers, is sunk by Ozumat. He ends up at Budd's Dig in Kelp'thar Forest.

He also appears in Thistleshrub Valley of Tanaris near the entrance to Uldum, along with Adarrah. Budd and the others were planning to drive a caravan into Uldum to search for artifacts. Unluckily, the caravan was ambushed by pygmy mercenaries that were hired by the tol'vir to kill any intruders. Budd concocted a crazy plan to get the team and a Ramkahen prince out of the Tol'vir city, which, strangely enough, worked.

Players fighting in the Molten Front may receive Budd as one of their random strike force partners in the daily quest,

Have you checked out my breathin' hat?

No more suckin' on clams for Budd! No sirree...

I still got my breathin' hat!

Listen, <class>. It's clear that you and your friends know your way around Azeroth. Surely you've come across certain folks who hunger for fame and fortune.

Send me anyone who might be willing to enter Zul'Aman and I'll make it worth your while.