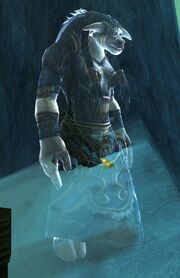 She had been lost in either the Borean Tundra or the Dragonblight when she was trying to find a relic to prove herself worthy of Akiak. Akiak had been out searching for her when he found the undead tauren Trag Highmountain. When Akiak traveled with Trag to the Dragonblight, they found her body next to the remains of the great proto-dragon Galakrond, impaled by the spear of a magnataur.[1]

Buniq's spirit would later appear before Kalecgos when he traveled to Galakrond's Rest in an attempt to return a cursed artifact he had found. Buniq uncovered a severed hand in the snow that held a small orb, telling Kalec some things should not remain buried before vanishing.[2] When Jaina Proudmoore was called to Galakrond's Rest and found the hole Kalec had dug, Buniq again appeared. She informed Jaina that after Kalec left, someone else appeared to investigate the hole.[3] Jaina theorized that Buniq's "ghost" was actually Tyr in disguise.[4] However, this seems unlikely as Tyr had died long beforehand in the Tirisfal Glades.[5]

[The Silver Hand]. She directed the paladin to Jotun.[6]

A silver hand was forged by Jotun, Tyr's dearest friend for many ages. When Tyr found proof of Loken's betrayal, it was Jotun who stayed behind to hold off the fallen watcher's pursuit.
Your friend came seeking answers, his mind flooded by memories stored in the Spark of the noble watcher. He learned of Tyr's ancient battle against Galakrond, and of the hand he lost in the dragon's maw.
Your friend sought out Jotun, but the Spark did not warn him of the cruel curse with which Loken twisted the watcher's mind. The paladin rushed to the chasm south of here, only to meet his doom.