For the lore of the zone and its status after the Cataclysm, see Burning Steppes.

This rugged region is full of craggy foothills, scattered boulders and warring factions. Rivers of lava dot the landscape, as well as charred earth and burning ruins. The sky is a red hue here, due to sporadic eruptions from Blackrock Mountain. Blackrock Spire, an orc stronghold in the Second War, stands proud and defiant among the mountains. Dark Iron dwarves control the fortress’s deeps, though rumor has it that Ragnaros the Fire Lord still broods in the shadows. Black dragons under Nefarion hold the spire’s upper levels, and the two groups battle constantly for supremacy. The surrounding countryside is home to Blackrock orcs and Fire-Gut ogres, all brutal castoffs from the Second War. The Molten Span, a massive stone edifice in the north, bridges a river of fire and leads to Khaz Modan.[3]

While many use the Burning Steppes as a thoroughfare, it is populated by one of the few successful orc settlements in Azeroth. These orcs do not honor Thrall’s truce with the Alliance, instead following the barbaric practices the orcs used from before the Third War. Deeper into the region, ogres, dragons, and the Dark Iron clan of dwarves can be found. With the volcanic activity and lava flow, the weather is perpetually hot and dry.

The Burning Steppes are located north of the Redridge Mountains and south of the Searing Gorge. It is dominated by Blackrock Mountain in the northwestern area. It is a central location housing the black dragonflight and various creatures. It also has quite a few high-level instances. It is recommended that characters be at least level 55, as the creatures are some of the most powerful in the game.

The Blackrock orcs maintain a lasting settlement around the volcano known as Blackrock Stronghold, staying hidden from the road but always keeping watch for Alliance attacks. These orcs are more typical of the type of the First and Second wars rather than the current Horde in Kalimdor. Bloodthirsty and savage, they mine the mountains around Blackrock Spire for metals with which to make weapons and armor. The Firegut ogres from the south study arcane magic, but their massive bodies still allow them to excel in combat. Give an ogre sorcerer a club and she’s still likely to bash out the brains of the strongest dwarven fighter. This violent race is dedicated solely to claiming the Burning Steppes as ogre territory. The Alliance — not to mention the orcs, the Dark Iron dwarves and the dragon folk — will not let this happen, as they refuse to lose control of the only passage to the north. The black dragons are elusive, and one who wishes to avoid getting torn apart doesn’t approach without considerable firepower. They will attack solitary travelers for sport and consider anyone approaching their usurped fortress free game.

A raider in the burning steppes

These steppes were formerly part of the Redridge Mountains before the Dark Irons came here after their exile. They established a colony called Thaurissan, but their sorcery turned out to be their undoing. Their thane, a mad sorcerer named Thaurissan, tried to summon elemental minions to aid him against the Ironforge and Wildhammer dwarves, but instead he summoned the elemental fire lord Ragnaros. Ragnaros’ arrival melted several mountains in this range and forged a great volcano in the blast’s epicenter. Now, the remaining Dark Irons live as puppets to Ragnaros and his fire elementals, who dwells under Blackrock Spire. Orcs also came here after the Second War and maintain settlements around and within the volcano, the climate being to their liking. The Horde conquered Blackrock Spire and used it as a base of operations during the campaign against Lordaeron in the Second War. Warchief Orgrim Doomhammer slew the human hero Anduin Lothar by the foot of the volcano at the war’s end, though Lothar’s death turned the tide and spurred the Alliance on to crush the failing Horde.

Alliance
Alliance players can reach the Burning Steppes from the Redridge Mountains to the south.

Horde
Horde players can reach the Burning Steppes from the Searing Gorge to the north, through Blackrock Mountain.

Lacking the grace and beauty of Khaz Modan’s peaks, the Burning Steppes’ mountains show the force of the energy that twisted them. The very rock melted when the volcano was formed, and lava changed the surrounding areas forever. The Blackrock Spire is awe-inspiring in its sheer mass and obvious devastation, while the rest of the land visibly attempts to recover from the damage done by the summoning of the Firelord, Ragnaros.

In the northwest of the Burning Steppes sits the impossibly high Blackrock Mountain. It is a volcano that is still active over 500 years after its birth at the summoning of Ragnaros. The Burning Steppes are mostly under the control of the Black Dragons and their Blackrock Orc allies. In the midst of the barren Steppes are the Ruins of Thaurissan, the ancient Dark Iron capital that was destroyed in the summoning of Ragnaros. In the southeast, the Alliance has developed the outpost known as Morgan's Vigil.

There are no instanced dungeons in the Burning Steppes themselves; however, Blackrock Mountain to the north houses quite a few high level dungeons. There are no PvP battlegrounds in this zone. Several micro dungeons can be found here. 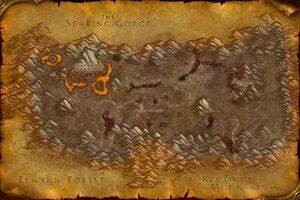 The Burning Steppes are home to several characters of note. At Morgan's Vigil, Marshal Maxwell seeks aid in locating a high-ranking officer of Stormwind. At Flame Crest, Mathredis Firestar attempts to feed his tainted addiction to magic by offering enchantments in return for powerful arcane components. And at Slither Rock, the vicious Cyrus Therepentous sends bold adventurers into the Blackrock Depths in search of the essence of fire.