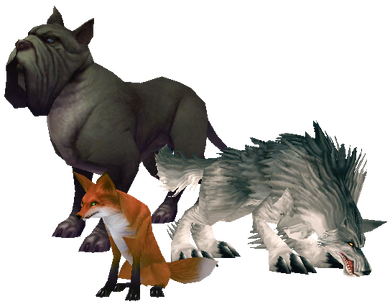 Canines are carnivorous predators that usually hunt in packs, but if found alone, usually have other canines nearby. They vary in size from a several pounds to several hundred pounds, and most wild canines aggressively attack nearby threats. Most canines can swim, but rarely do, and are not strong swimmers. The hunters of many races can tame them for use as pets or tracking hounds.

At the start of World of Warcraft, wolves and worgs were the only canines. Mastiffs, pugs and foxes appeared later in Wrath of the Lich King and Cataclysm.