The Cape of Stranglethorn is the southern part of Stranglethorn Vale, designated as the piece of land south of the area around the Gurubashi Arena. Booty Bay, located to the southwest, is a major city run by goblin pirates - many profession trainers are located here, as well as a neutral Auction House, bank, inn, a boat to Ratchet, and unique recipe/item vendors. The weekly Stranglethorn Fishing Extravaganza event happens every Sunday from 2-4pm.

The Cape of Stranglethorn is the southern part of Stranglethorn Vale, split from the north by the Sundering whirlpool caused by the Cataclysm. It traces the escalating conflict between the goblin pirates of Booty Bay and their rivals, the Bloodsail Buccaneers. The rest of the zone is dotted with troll ruins and sandy beaches.

Cape of Stranglethorn is home to several characters of note. In Booty Bay, Baron Revilgaz and Fleet Master Seahorn seek aid in the battle against the Bloodsail Buccaneers. In Grom'gol Base Camp, Kin'weelay attempts to rid the jungle of the bloodthirsty Bloodscalp and Skullsplitter trolls.

The Gurubashi Arena is an arena that has a treasure chest placed at the center every 3 hours. Players fight over the contents of the chest, either for useful loot, or for the vanity achievement 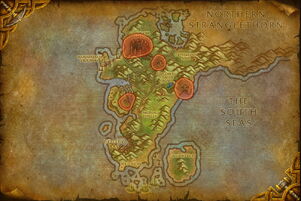 The Cape of Stranglethorn has four dig sites: