For the Forsaken located at the Shrine of Two Moons, see Edward Hanes (NPC). 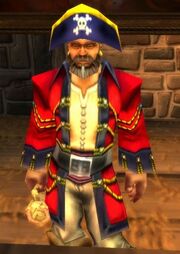 Captain Edward Hanes is the ghost of a human pirate captain affiliated with Stormwind. Many years ago, when he was still alive, he was getting drunk with his friend captain Sanders in a bar in Southshore, where he spoke of his plan sailing his frigate all around the world, across the Great Sea. His ghost is located at Wyrmscar Island in the draenei territory of Bloodmyst Isle.

He starts the following quests:

Making these quests easier, he also bestows a buff named The Captain's Kiss, which grants increased swim speed and water breathing for 20 minutes.

After a short duration in Old Hillsbrad, a scripted event will occur when he and Captain Sanders talk about their boats and treasures.

Hanes: What are you doing Sanders?
Sanders: I just be makin' sure we wasn't followed! *hic*
Sanders: It be clear...
Sanders: Thar she be! Ain't she a beaut?
Hanes: Aye, she's a beaut alright. And you parked her right next to my frigate! *hic*
Sanders: That thar monster be yers, Ed? Arrr...She's a big'un!
Hanes: Ayep! She's all mine... I'm gonna sail her around the world. Across the sea!
Sanders: Arrr, Ed! She definitely be seaworthy
Hanes: Sanders, what have you got in that chest?
Sanders: Can ye keep a secret, Ed? Arr...dead men tell no tales!
Sanders: It be me treasure, Ed. Me life's work! Arr...One white shirt fit fer a pirate king to be wearin'!
Sanders: One red sash that ye can put on yer head or britches. Pride o'the fleet, that sash is...
Sanders: An'last but certainly not least, one enormous bag! Big enough to fit eight whole apples! Eight, Ed! Can ye believe it?
Captain Edward Hanes gasps
Sanders: Yarrr! Keep it down, Ed! Thar be scallywags about! Their scallywag ears be listenin' for gasps like that one just escaped your lips!
Hanes: I'm sorry, Sanders. I've just never seen such a bounty. It took me by surprise.
Sanders: It be alright, Ed. Me booty be locked away good in that thar chest. No fool will ever have Cap'n Sanders's treasure! Let's go get another drink. The spirit be runnin' low.