Greenskin paced up and down the deck of his ship, and it was difficult (but not impossible) to pull him without also attracting his minions. Players had to take caution on the trash pulls just prior to Greenskin; it was very easy to accidentally pull Greenskin as well. When fighting against him and his minions, players could sap and polymorph adds, and focus on Greenskin. The tank also should keep Greenskin away from casters because of his cleave. 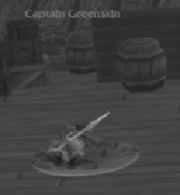 It is revealed Greenskin was killed when a group of Alliance adventurers attacked the Deadmines. His body is viewable in A Vision of the Past. He, like all other goblins, was given the updated goblin model.