Captain Luc Valonforth[1] was one of the Alliance captains (the others being Falric, Marwyn and the Forgotten Captains) who accompanied Prince Arthas Menethil to Northrend. 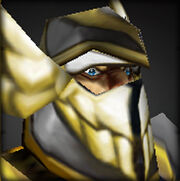 When an emissary arrived from Lordaeron, it was Valonforth who met with him. The emissary ordered Valonforth to withdraw the army back home. Captain Luc Valonforth answered to King Terenas rather than Arthas, and prepared the army for its journey back to Lordaeron. However, Arthas sunk the ships that could return them home, and blamed it on his mercenaries. Valonforth had the mercenaries killed, and looked on as Arthas declared that they would finish what they started here or fall.

His fate afterwards is unknown, but it can be assumed that when the final battle came, Valonforth fought alongside his Prince and achieved victory.

[72] The Truth Shall Set Us Free, where he re-enacts the scene involving the Alliance Emissary who ordered the troops of the 1st Legion to be recalled to Lordaeron. Unlike the rest of the Forgotten, he does not turn into a ghost at the end of the quest - he just vanishes like Muradin and Arthas, suggesting he did not die there.

In Arthas: Rise of the Lich King, most of the captain's lines from Reign of Chaos were attributed to Falric, but an unnamed captain spoke with the Alliance Emissary. In a Wrath of the Lich King quest, that captain was named Luc Valonforth. Timolas, a galley winner, noticed that people might confuse Falric and Valonforth, and pointed out the issue to Medievaldragon of BlizzPlanet. Medievaldragon contacted Christie Golden, who explained that since she finished writing the book before the release of Wrath of the Lich King, she had not known about the flashback quest involving Valonforth. Medievaldragon contacted the editors and informed them of the possible inconsistency. The editors agreed to include Valonforth in the book to ensure the clear difference between his character and that of Falric, though there is still an unnamed ship's captain in one scene that may or may not be Luc. Thus it was confirmed that the captain from Reign of Chaos was divided into separate characters, though Falric retains the most lines and appearances and is the only one playable in-game.

The Captain at the Wrathgate.