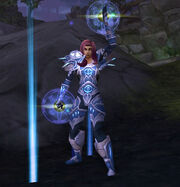 The Sunreavers will stoop to even the lowest levels to get what they want, <name>.

I received reports earlier that several Kirin Tor have gone missing. I suspect the Sunreavers may have something to do with this.

Hopefully they have not been harmed, or my wrath will be swift and terrible. I trust you to bring them back in one piece, but please hurry.

Magic runes to hold them captive? That is despicable!

You have saved many today, <name>. I cannot imagine the horror of being frozen and helpless among so many enemies.

Kirin Tor Captives are trapped in red runes all over Wildvine Marsh and the Dawnseeker Promontory. Interact with the red rune to free the captive: