Wowpedia
Register
Don't have an account?
Sign In
Advertisement
in: Carrion beetles, Vermin, Manual of Monsters,
and 2 more 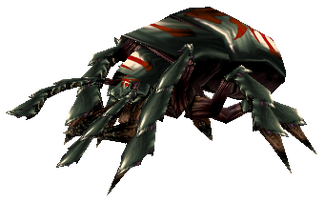 In Warcraft III: The Frozen Throne, the carrion beetle could be summoned by Crypt Lords.

These creatures use their fierce mandibles to rip the flesh from the Crypt Lord's foes. Carrion Beetles summoned at higher levels of skill can burrow into the ground, losing their attacks but providing stealthy vision that can be placed strategically. Unlike most summoned units, Carrion Beetles are permanent until slain. Attacks land units.[1]

Carrion beetles are sizable, almost 4 feet long in total. Nasty, three-pronged mandibles make up at least a third of that length. The mandibles and underside are grayish-blue and its hard carapace is bright red. These insects prefer to make their homes near rich sources of carrion, thriving especially near graveyards. They feed only on the flesh of the dead. Carrion beetles bury the body of a slain victim and leave it there for several days before burrowing back down to begin eating. Several more days may pass for a fully grown carrion beetle to consume a corpse completely, and nothing remains when it's done.

A carrion beetle will occasionally lay its larvae within a buried corpse instead of consuming it. The larvae later hatch and eat their way out of the body and then consume whatever remains. They then eat each other until only the strongest carrion beetle remains. The winner burrows its way to the surface and begins its own endless quest for dead flesh. Carrion beetles attack in a simple, mindless assault whether alone or in a swarm.[2][3]

Carrion beetles often form a symbiotic relationship with the stranglethorn plant, living in burrows at the vine's base. There they help break down the remains of the plant's victims and lay eggs which in the decomposing corpses. The beetles are considered food by other predators, and lure the creatures to the vine's reach.[4]