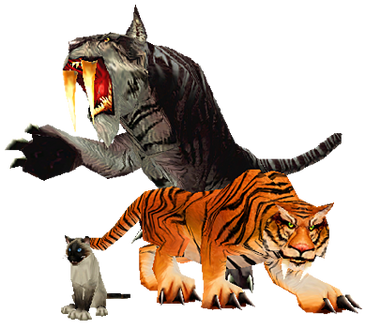 For other uses, see Cat (disambiguation).

Cats are carnivorous predators that usually hunt by sneaking up on their prey to pounce upon it. They vary in size from a few pounds to several hundred pounds, and most wild felines can kill prey considerably larger than themselves. Only a few species of cat are strong swimmers.[citation needed]  Smaller cats also appear in the World of Warcraft, they are domesticated felines, often called house cats, and are a delicacy to murlocs.[1]

A type of large cat called a saber is also the night elf racial mount.

The saber mounts are bought in Darnassus and in the Argent Tournament except for the Wintersaber, Zulian Tiger and Spectral Tiger.