Please do not manually place articles in this category; use {{silly}} rather. 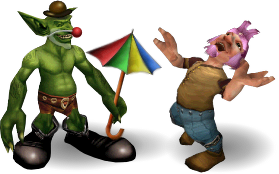 {{Silly}} should only be used for things that are not part of the games, tcg, novels, rpg, or manga. It is to be limited to material created by the fan community, or out of game joke material that Blizzard releases but are not intended to be sources of lore; such as April Fool's day jokes, references to WoW in pop culture by other shows, or books, etc.

This template is for material that is not intended to be part of lore. The criteria for when the template is appropriate is based on if the material is fan generated, or is part of an out-of-game Blizzard joke. Something intended to be a joke, like Murlocos or Pandaren Xpress can be marked with silly, unless it is confirmed by other sources of lore. Something like the South Park World of Warcraft episode, or Leeroy Jenkins video is certainly a good spot for the Silly template.

On the other hand, things that appear in game, or other valid lore sources like Sprok, Scooty, Jhordy Lapforge, or even Goblin pod racers are funny, but are intended to be homage to popular culture. Nonetheless, they are still a part of lore. They are not valid articles to slap the silly template on. An article like Crushridge Ogre Marching Song is arguably silly but since it is derived from lore, it would also be the wrong spot for a silly template.

Articles in this category must be notable, being known on at least two different servers or recognized in some way by Blizzard Entertainment.

This category has the following 3 subcategories, out of 3 total.

The following 8 files are in this category, out of 8 total.