Centaur[2] (sometimes pluralized as centaurs)[3] are a warlike tribal race of half-horse[4] humanoids. They abound on the Ohn'ahran Plains of the Dragon Isles as well as in central and southern Kalimdor, primarily in Desolace and the Barrens, where they engage in constant war against other centaur and tauren tribes. They are savagery and brutality incarnate.[5]

The earliest known centaur belong to the Maruuk civilization, which have existed since before the War of the Ancients. The Wild God Ohn'ahra long ago guided them to the Ohn'ahran Plains of the Dragon Isles, where they came to live in peace with the green dragonflight.[6]

Much later, 1,100 years before the First War,[7] a separate centaur civilization arose on Kalimdor.[8] Though legend held that they were the bastard offspring of Cenarius,[9] the centaur of Kalimdor were begotten by Zaetar, son of Cenarius, and the earth elemental princess Theradras.[10][11] Shortly after the centaur's creation, the ruthless creatures murdered their father.[10][11] The centaur clans in Kalimdor are therefore the bastard offspring of Zaetar. As such, they have shared ancestry with the dryads.[12] The

[Cloven Hoof] found in Thousand Needles was said to be from the time of their creation.[13]

Conflict with the Horde

Hatred of the Centaur, a tauren myth, tells how the early tauren were driven from their ancestral lands in Mulgore[14] and forced to wander the Barrens of Kalimdor. The tauren claim that the centaurs have always existed to scourge the land.

The barbaric centaur over-hunted giraffes for decades, but it was the tauren who saved the species from extinction.[15]

When the orcs first arrived in Kalimdor, they found the nomadic tauren under constant attack from the centaurs. Through the aid of the orcs, the tauren were finally able to reclaim their ancestral lands and live in peace once more. The conflict between the Horde and the centaurs continues, however, particularly in the Barrens. The members of the Horde hate them so intensely that they have taken to skinning their corpses and making rugs out of them.[16] Such decorations are a common sight in cities such as Orgrimmar and Thunder Bluff.

The Horde and the Alliance are both attempting to control the savage centaurs by encouraging inter-tribal conflicts, so as to prevent the centaur from banding together and becoming a dangerous force.

Despite the hostility each centaur clan has traditionally had for the others, recently a centaur known only as the Centaur Pariah, labeled as a heretic by his people, developed plans to unify the clans. Players can aid him in his design by entering the holy tomb of Maraudon and forging the

[Amulet of Union], which he intends to use to bring his warring people together as one. Whether or not the centaurs would actually be able to consolidate into a unified, civilized people remains unknown.

If redeemed, Zaetar's Spirit also spoke of hope for a more positive future for his offspring.

Theradras loved the centaur, and she was worried that the Horde's rise to power might eventually drive them to extinction. After years of hostilities with the orcs and their allies, she acted to save her progeny. She infused the centaur with her power, driving them to make war and claim new territories outside Desolace. The centaur warbands stormed out of Desolace and laid waste to the surrounding regions. Horde forces sent by Thrall quickly discovered that the centaur were slaughtering their other tribes just as much as they were attacking outsiders. When they investigated further they met Warug, who told them of the origins of the centaur and Theradras's recent actions. The Horde united with Warug and his Magram clan, who held no loyalty to Theradras unlike the other clans, to suppress the other tribes. They then entered Maraudon and slew Theradras. Their victory halted the spreading corruption in Desolace and stopped the violent bloodlust in the centaur. With the Horde's blessing, the Magram became the leaders of the united centaur and led them to an age of tranquility. Yet none knew how long they would stay on the path of peace.[17]

In the wake of the Cataclysm, the Kolkar, Magram, Maraudine, Gelkis, and Galak tribes united under a new High Khan named Aratas, and his "father", a massive elemental from Maraudon. With all centaur clans united, and with an army of slaves, they plan to level the cities of Thunder Bluff and Orgrimmar with slave-built siege weapons and the powers of Aratas' father. However, their plans to dominate Kalimdor was put to a halt thanks to the efforts of Felgrim, Ironhoof, Malgar, Rada'jin, Shagara, Ashra and the centaur Dorthar. After the death of Aratas and his father, the centaur clans once more fractured and split apart.[18]

In World of Warcraft: Cataclysm both the Horde and Alliance are trying to unite the centaur clans within Desolace to combat the Burning Blade clan[19] and their dark masters.[20] Only the Kolkar, Magram, and Gelkis centaur clans unite.

Following the Argus Campaign, Magni Bronzebeard came to Desolace to speak with the centaur about Azeroth.[21] 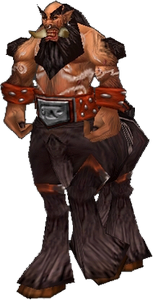 A centaur appears as a creature with a horse's body and legs and with a humanoid's torso, arms, and head extending from the front part of where a horse neck and head would normally be placed, with bony protrutions and growths marring every visage.[22] A full grown male centaur can stand over seven feet tall from hooves to head and weighs over a ton. Kalimdor centaurs can actually suffer the effects of undeath. Male centaur faces have no lips, giving them the appearance of an eternal grimace, some centaur leaders seem to have tusks which may or not be ornamental. The lower face of a female centaur has yet to been seen as none have been seen without a veil around their face.[citation needed]

Each tribe of centaurs is led by a khan, who is generally a leader of above-average strength and intelligence. They commonly adorn themselves with body paint of henna and thick dried mud, signifying their social role, rank or clan they hail from.[22] Some of the clans, if not all, practice cannibalism and will eat the flesh of other sapient races as well, such as the tauren.[23] A great show of respect among centaur is smacking a fist on your own chest.[24]

Centaurs follow a shamanistic faith, but their brand of shamanism is far different from the more gentle practices of the Horde. Centaur females tend to use a dark, perverted form of shamanism. Magic use among centaur males, on the other hand, is quite rare.[25] The centaur acknowledge the Earth Mother.[26] Despite this, the centaur view the mystical pursuits of shamanism and nature as weak.[27]

With the rise of Aratas during the Shattering, the social class of the centaur changed drastically. The brutish, ugly and barbaric "older breed" now serve the new strong, majestic and proud breed. This new breed reveres Aratas in a similar manner to a god, who in turn reveres an unnamed Elemental lord in Maraudon who rose to power after Princess Theradras was defeated. They look more human-like, cleaner and stronger than the former breed, and seemingly much more intelligent as well.[28]

The centaur claim that a white kodo is a harbinger of doom.[29]

Centaur leadership relies on a core of trusted, disciplined warriors to keep the others in line.[30]

Although centaur, tauren, and quilboar all hate each other, the three races come together to do trade at Flayers' Point in Desolace. But there is no love lost between them, and brawls erupt like clockwork every five minutes, earning the trading post the nickname "Slayers' Point".[31]

The goblin tinker Salzhigh created clockwork penguin toys for the centaur in the Barrens. Regarding it with awe, the centaur purchased them as idols and worshipped them at altars.

Five barbarous centaur tribes dominate the entire region with the strength of overwhelming numbers and unequaled ferocity. each tribe is led by one of the dreaded khans and is known by a distinctive tribal color — Black, Brown (Gelkis clan), Green (Magram clan), Red (Kolkar clan) and Yellow. Members use the color to mark their weapons and their faces.

Centaurs are savage and brutal, and they often take prisoners. These prisoners are usually eaten. However, rumors tell of centaurs dragging humanoids of all sorts off to become slaves, forcing them to work in hardscrabble opal mines. Opals are used to make crude trinkets or are thrown into sacrificial offerings to the spirits. Young tauren have made something of a game out of this tradition, snatching away the centaur's offerings and leaving insulting totems in their place. They must be swift, lest they be caught by the centaur, who leave their gutted remains as a warning to others who would consider doing the same.

Filthy creatures, centaurs are always followed by swarms of flies, which are attracted by the centaur's repellent odor. Centaurs have no qualms about leaving piles of dung strewn about their encampments, and no concept of privacy.

Each of the five tribes in Desolace had their own unique tribal color: black, brown, green, red, and yellow. Members used the colors to mark their weapons and their faces. These colors are literally the names of centaur tribes fathered by Zaetar, but likely refer to the five main centaur tribes (Kolkar, Magram, Maraudine, Gelkis, and Galak). The Red tribe for example lived in Spearhold.[34][35][36][37] Additional tribal colors found in modern Desolace include blue and purple.

"Long, ago, the kaldorei god Cenarius bore three children, the centaur, the dryad, and the keeper of the grove. However, one son, the centaur, grew to despise his beautiful siblings, then all other creatures of the world, and challenged Cenarius. The centaur believed that he was the strongest of the three children, and that Cenarius refused to love him and instead doted on his other children.

In embracing his hatred and savagery, he struck his father in blind rage, trying to force his father to love him above all other creatures. In retort, the god cursed the centaur, stripping him of his beauty and powers, leaving him only with his hatred and anger. The centaur fled in rage, and swore a blood feud on all the creatures of the world. He reserved most of his hatred for Cenarius' favored children, and thus the night elves drew his ire as well. We tauren too drew his anger, as he was jealous of our strength and power with the world, the same power he lost.

His children carry his anger, and destroy everything they touch, bearing their father's hatred of all things of the world.[38]

Centaurs speak Low Common and Common. The Krenka clan speaks Krenkese and Low Common. A few centaurs learn the languages of their enemies, including Goblin, Orcish, Taur-ahe, and Zandali.[39][40] Taur-ahe is learned as a secondary language,[39] though a few centaur primarily speak Taur-ahe.[41]