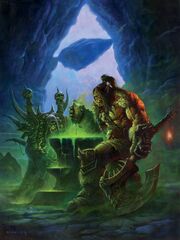 The Chalice of Rebirth[1][2] (also known as the Cup of Unity)[3] is the cup with which the orc clans of Draenor drank the blood of Mannoroth, offered to them by Gul'dan, at the Throne of Kil'jaeden in Tanaan Jungle. It was carved from the horn of an unknown creature, being curved and yellow, and had strange glyphs inscribed on it.[1]

While the names "Cup of Unity" or "Chalice of Rebirth" were not used in Warlords of Draenor, the cup was also used on alternate Draenor by Gul'dan when he first drank Mannoroth's blood.[4] Three days later, he offered the assembled orc clans the fel blood, but they rejected it at the command of Grommash Hellscream. The Iron Horde then killed Mannoroth, captured Gul'dan and launched an invasion of Azeroth. In response, the Horde and Alliance invaded Draenor, made allies, and took the fight to the Iron Horde.

A freed Gul'dan once more offered the chalice to the orc clans after the Iron Horde's many defeats over the continent. Grommash refused but was effortlessly incapacitated by the warlock when he moved to strike Gul'dan down. Repeating his offer once more Gul'dan brought forth the cup and this time, Kilrogg Deadeye stepped forward and drank. He became the first of an army of fel orcs.